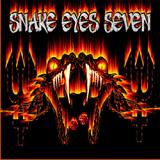 Review:
I have one major problem with Canada’s Snake Eyes Seven – lack of variety. The band, featuring former Kick Axe bassist Victor Langen and Into Eternity‘s Daniel Nargang, have decided on offering sludgy Black Sabbath influenced metal over and over and over again. There is nothing wrong with the sound and style, assuming you like Sabbath mixed with a hint of Black Label Society, but before long everything starts to sound the same.

I can’t find a song on this self-titled debut that is absolutely atrocious, but I also can’t find one that completely stands out. Some of these songs, such as “Bullets & Booze”, sound as if they could have come from Kiss‘ Carnival Of Souls sessions. At least Snake Eyes Seven has a better grasp than Kiss did about how music like this should played. However, no matter how talented the musicians are, the fact remains that the music is dreary and depressing.

“Love For A Moment” is one of the better tracks and the stoner riff to “You’re To Blame” has a great groove. The solo during “Photos Of Th’ Dead” is also top-notch, but as a rule though everything here plods along, never reaching a peak or hitting a valley. I was starting to wonder if my CD player was skipping and repeating the same tune over again.

Being a fan of Kick Axe I’ll have to say that people skip this one and try to find a copy of the rare Vices. A group named Trouble perfected this Sabbath influenced doom-sludge back in the late 80s, Snake Eyes Seven haven’t reached that level yet.