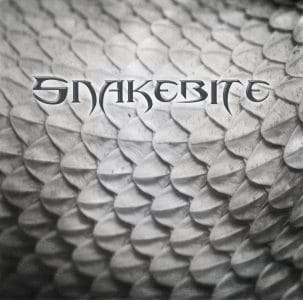 Snakebite are a hidden gem out of Poznań, Poland. The band landed at #1 on the country’s biggest rock radio station in 2014, topping international stars like Kylie Minogue, Michael Jackson, Coldplay or Lenny Kravitz. The band stayed in the top 10 for four consecutive weeks with the song “Try to Fly”, the closing cut on Snakebite.  In mid-2015, Snakebite collaborated with one of LA’s finest producers — Warren Huart (Aerosmith, Ace Frehley, Slash), for the current album, where most of the recording process took place in Orange County’s Hybrid Studios. In fact, the drums used on the album were the same as the ones used by Joey Kramer on Aerosmith‘s Music from Another Dimension.  Snakebite were handpicked to open for Australian rockers Airbourne later this year in Warsaw.

From the moment I hit play, Snakebite was like a party in my ears. “Outta Control” is a fabulous track that is real LA Guns style sleaze. “Stay Away” is very much in the same vein, with detailed time signatures and solos everywhere. The second single, “Leavin’ Tonight” offers even more great stuff that is right out of the ’80s contemporary hard rock songbook. Check out the singles for “Leavin’ Tonight” and “Stay Away” below, and see for yourself.

“I Am” is a little poppier, with a neat drum line and some interesting vocal and guitar work. Again, “Rock ‘N’ Roll” has a great beat and a catchy groove. I’m really getting into Snakebite by this point! “Dream You” starts off as your requisite ballad, but eventually blows up into a mid-tempo rock song.

It is at this point Snakebite gets uglier and nastier — almost like the difference between Skid Row and Slave To The Grind.  “My Final Hour” has the crunchy guitars and double bass missing from the album’s first half. Even the lyrics are darker, singing “I can’t accept the truth, I can’t handle this pain…”.  “Something Different” is a plodding metal piece that’s a bit conceptual, and a little New Wave Of British Heavy Metal. Once the song develops, there’s some power to be offered. “Sinner” has an almost Megadeth feel to it, with ominous guitars. You just know something’s going to get nasty soon enough. Closing out the album is “Try to Fly”, a pretty power ballad that has earned Snakebite solid success in their native country.

Poland’s Snakebite caught me unexpectedly. The album Snakebite could have been recorded in 1989 (or ’91 for the second half) and I wouldn’t know the difference. It’s flat out gritty rock & roll that gets nastier the further you get into the record. I have said it before…. I love how Sleaze Roxx lets all of us discover new and exciting bands from around the world. Check out Snakebite.  They don’t disappoint.

(NOTE: Snakebite from Poland is not to be confused with the Snakebite band from Germany, that Sleaze Roxx has reviewed in the past. Confusing, I know, right?)