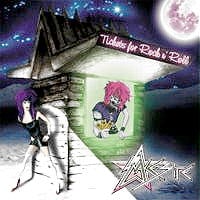 Review:
Remember in the late 80s receiving demos from your buddies on cassette that had been copied so many times that they started to sound like crap? But you knew that underneath the horrible production was some cool music? Well that is what this demo from Snakebite sounds like. Cool music, but the production leaves a lot to be desired.

The band has a swagger that is missing from so many of today’s artists, as displayed on “Pussy & Roll” and “Hard Rock”. Both tunes have a bottom end that would make many rockers jealous, while Smoke (definitely deserving of the name) struts his stuff on lead guitar. Vocalist A.J. pretty much butchers the English language, but hell these guys are Italian! Besides, I’ve always been fond of foreign bands that aren’t afraid to show off their accents.

I really like the sound of Snakebite, as they remind me of a better time – a time when similar bands like Sweet F.A., Poison and hundreds of other glamsters ruled the land. It really is a shame about the production, considering the album artwork, band image and even their website (www.snakebite.it) is all topnotch. Someone please send these guys enough money to get them in the studio again with a professional and we will all be in for a treat!