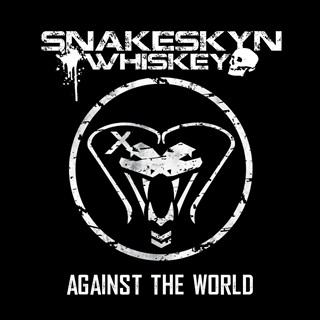 SNAKESKYN WHISKEY
AGAINST THE WORLD
Released on February 16, 2014 (Snakeskyn Whiskey)

Review:
If every track on Snakeskyn Whiskey‘s debut was as good as the opener “Outta My Way” the record would likely be my favorite of the year. While the rest of the tracks on Against The World may not be able to match the excitement of the opening song, they are all quite good — making this EP from the Montreal based quartet a solid and entertaining release.

Snakeskyn Whiskey are pretty much right on the money on how they describe themselves — “a gritty old school style of song writing, with a new age attitude on sound and dynamics.” There are definitely a lot of ’80s sleaze and metal influences in the songwriting and music emanating from the Canadian quartet, but with a modern feel to it (as advertised by the group) that helps the band separate themselves from that era.

“Outta My Way” is a near flawless track that starts with a rocking and infectious guitar riff, sleazy lyrics and vocals that are shock full of attitude, one scorching guitar solo from Carmine Scaringi and a “talking voice” (for lack of better words) at the beginning and intermittently throughout the song which surprisingly works really well. I could listen to “Outta My Way” all day long. “Toxic Paradise” is a bit of downer, simply because it follows “Outta My Way”, but it grows on you with each listen — once again the guitar solo is a thing of beauty, not super complex but melodic while transporting you to a fever climax before the main riff brings you back into the song. “History” starts with a guitar intro that sounds, for a good portion, very similar to the one found on Skid Row‘s “Youth Gone Wild” before slipping into something that sounds original with a catchy sing along chorus and another scorching guitar solo from Scaringi. It is almost too bad that part of the guitar sounds borrow so heavily from “Youth Gone Wild” because it takes away from how good “History” really is.

Snakeskyn Whiskey really keeps the pedal to the metal throughout the seven songs on Against The World. The common themes within all the songs is that they are all built on some great monster guitar riffs, lead vocalist Matt Dibi‘s singing fits the music like a glove, and each song’s solo really adds to the track — check out in particular the solo in “Crazy Girl” — except for “Psycho-Maniac” which unfortunately goes “industrial” during the solo. The one track that I am not crazy about is “Endless Pursuit”, where I find that frontman Matt Dibi and whoever is delivering the background vocals sing at a lower tone than necessary, making the song dull at times. Snakeskyn Whiskey should have revisited what worked vocally during “Outta My Way” and applied it to “Endless Pursuit”.

At the end of the day, Snakeskyn Whiskey deliver an album shock full of attitude and heavier sleaze influenced rock. Snakeskyn Whiskey are definitely a band to look out for and Against The World is worth picking up for anyone who loves the ’80s sleaze rock genre but at the same time wants a slightly more modern and not outdated sound