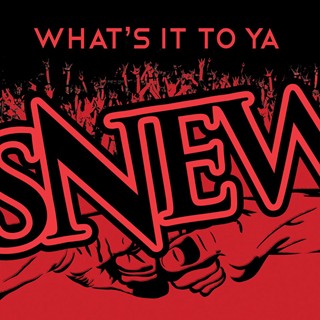 Review:
If you’re already a card carrying member of the ‘Snew World Order’ you know exactly what to expect from these Los Angeles natives. On their third album What’s It To Ya Snew stay true to the brash playbook established on their previous two efforts.

To say this new album is better than their 2008 debut Snew You may be pushing the envelope, but one could easily argue that it matches that underrated release in every single way. The opening track “Release The Beast” does just that, setting the tone for what is to follow — but the best is yet to come. Lead-off single “Pull My Stinger” could easily be one of the most infectious songs to hit the airwaves this year, as the rhythm section of Mark Ohrenberger and legendary bassist Willie Basse prove to be one of the most consistent duos in the current hard rock scene. Even better yet is “Electrolux”, without a doubt the greatest song about a vacuum cleaner in the history of mankind. Ok let’s be honest here, it is likely the only song ever dedicated to a dirt sucking machine, but that doesn’t take away from the song’s intensity and flawless bottom end.

From there, Snew continue to deliver shit-kicking sleaze rock that is all brawn and muscle. Vocalist Curtis Don Vito spews tongue-in-cheek lyrics with a quality that would make the mainstream run in fear — not unlike an unruly pit-bull running loose in a high-class neighborhood. Even when Snew attempts somewhat of a ballad, as shown on “Bad Words”, the subject matter is at odds with the vibe and makes for a unique approach. Meanwhile the anthemic title track rolls along with a cool riff and rompin’ chorus before the album closes with the straight-forward rock number “All Over You”.

I still say Snew sound a lot like Jackyl, and with both groups releasing albums so close together Snew have thrown down the gauntlet in what could be an epic battle for the Southern tinged metal throne. But in all honesty Jackyl are going to have to release their best effort since 1997’s Cut The Crap to even match What’s It To Ya — as this album is consistent, entertaining, filthy and rockin’.