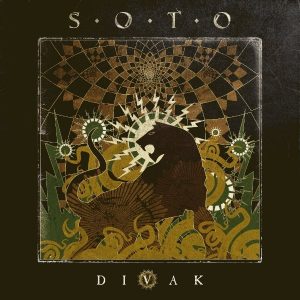 Review:
I have never been a huge fan of  Jeff Scott Soto. Not that I do not admire the guy’s skills. The thing is that apart from his brief stint in Neal Schon’s Soul Sirkus (a one album band), I somehow never really got the chance to listen to a lot of music he was involved in. Bearing this in mind, I had maybe a different perspective to a lot of his fans when approaching his latest release, the enigmatically titled Divak.

The album got my interest by a really strange title and even stranger cover art. Divak is a peculiar word, I could not find one in a British dictionary. In my native language (Polish), Divak means something like a “weirdo”, someone strange, peculiar. Accidentally, such is the latest album by Jeff Scott Soto and his band (now fully established as Soto).

This album seems to me rather detached from what Jeff’s AOR performances with Journey, or even more hard rock ventures like Soul Sirkus and Talisman (the band Jeff is still most known for). It is much more metal oriented than the aforementioned recordings. It is actually an album in which the boundary between heavy metal and hard rock seems very blurry. To make things even more interesting, it has a lot of progressive and industrial elements too, as the band really shifts gears at times and challenges the listener to different vibes and sound effects.

This is not your usual hard rock or even heavy metal album. It has a very modern feel, switching sound a lot of times. I cannot really tell why but this release kind of reminds me in a way of Winger’s swan song album before their break up in the mid ’90s (and then an excellent resurrection in mid 2000s) — the excellent Pull. Not because it is similar in sound, as Pull was much more mellow, and not metal at all. The thing that connects both of these albums to me is diversity, and the artists’ sense of pursuit towards a new sound. The line-up that Jeff fronts on Divak already released one record Inside The Vertigo, which was also heavy but not to the extent of Divak, and it was much more hard rock oriented, and much less diverse and future sounding than Divak.

All in all in, the strongest part of Divak in my opinion may be its main flaw in the eyes of a lot of other hard rock enthusiasts. This album is a peculiar piece of work. It takes you to places if you let it. If you are looking for a straightforward rock record however, you may be discouraged by all the progressive elements, the tempo and sound changes.

So again, if you like the straightforward in your face rock approach types of AC/DC, Crazy Lixx, or Junkyard, you may not really get this effort. If you however are ready to bet a bit of your time on it, you may actually end up liking it. The power, energy and fire are here, but they are all wrapped in sound which, albeit still sticking strongly to rock principles tries to surprise you with some new sounds here and there.

Again, the best thing you can do before buying this record is to head unto the label EarMusic’s Youtube channel and listen to the snippets. They are all short bits of each song, but they seem to illustrate what this album is all about. If you dig it — get it. If you don’t dig it, return after a day or two, and give it a few more spins. If it doesn’t grow on you, let it go. But, as it did with me, it might actually appeal to your musical tastes with time.