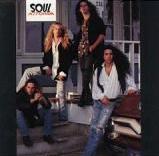 Review:
Soul Kitchen was a great, technically skilled blues-rock band that operated for a few years in the early nineties. They hailed from Los Angeles and looked pretty much like your average sleaze band at the time, but their sound drew a strong comparison to southern rock acts. The founding brothers Troy (guitar) and Curtis Lush (bass) came to L.A. all the way from somewhere in Connecticut and blended the L.A. sleaze sound with a strong bluesy influence. The band also featured a singer by the name of Jeff Wilson who managed to deliver some of the highest pitched vocals since AC/DC. Oh yeah there was also a drummer, one Fran Scaglione who did the job just fine.

Armed with full manes of hair, powerful bluesy hooks and southern feeling, these gentlemen released their self-titled debut album in 1992. This record is chock full of great rockers and ballads, a strong and well written mixture of sleaze rock and blues. It was the kind of music country chicks used to wet their pants to in the late 80’s and early 90’s

The songs that stand out on this release are “Blue Eyes”, “One-Way Ticket Man”, and “Mother Lode”. The ballads here are also great, especially “Rosie Jones”, which can stand in line with Poison‘s “Every Rose Has Its Thorn”.

Wrapping it up one can say this band had it all. Technically terrific musicians, well written lyrics, catchy songs, and an over the top singer who’s voice on a good day could probably break glass. The problem was the time when it was released. 1992 was already stuck in grunge and bands like Soul Kitchen were considered corny at best. The public eye fell pray to the fatal charm of grunge.

As a result this CD didn’t get even a bit of attention, although it deserved it. Now it is out of print and extremely rare to find. It truly is a long forgotten gem. It proves yet again that there is great music released by great artists lost somewhere out there.