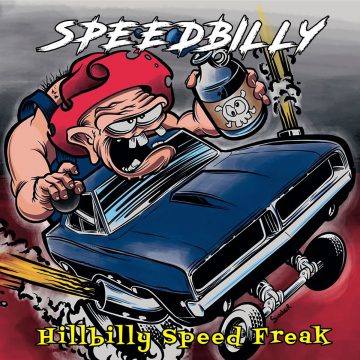 Review:
Grab an old beefed up Pinto wagon, pitch a case of Pabst tallboys on that pile of smelly smoke-stained clothes from the previous night’s bar gig, and toss in a mix tape of Mötorhead and Black Flag, and you might come close to describing what you’d find in a late night dive parking spot marked “Speedbilly Parking Only.” You know the spot, where the lot lights barely cut through on that Pinto hatch reared up as a parking bench for a mix of piss covered boots, and chaw stained trucker caps and for a minute, you ask yourself, “Is this actually Minnesota or did we miss a few turns?”

If old, dirty souped up cars and metal-tapped garage rawk happens to be your thing, then Minneapolis trio Speedbilly just might be your cup of cheap happy hour dollar special beer. Loud, raw, fast and wet with a bit of tongue in cheek spit, the band’s most recent drip pan of an EP is a four barrel punch of just good ol’ dirty rock and roll. Like something you’d hear coming from a barely standing stage in the back of a barely standing smoky bar in the worse part of a barely standing old building. A dive where the A/C takes a huge back seat to the beer fridge cuz we all know, beer cold, rock and roll hot, stinky and sweaty and luckily, Speedbilly offer pretty good imperfect, perfect rock and roll to drink to.

Starting loud foot down in Jimi Hendrix “Foxy Lady” feedback fashion, Speedbilly take the no-brainer approach with perfectly titled tune “Pedal To The Metal”, which is a fast driving rocker that invites a similar reaction as certain bits and pieces of early Venom, some Plasmatics, and even gasp, The Mentors. Not sure how the guys tracked this less than handful but there’s a rawness that bleeds through especially on the simply muddy bass guitar and poured through an old speaker vocals but man, that’s not a knock. Across the hood, it runs just right especially when the drums creep in one ear and the guitar the other to turn the key on “Dirty Mary, Crazy Larry”, a garage anthem that cheekily piles on like Primus with a tad bit more rawk spirit. In case you haven’t picked up the clue yet, only fans of straight up dirty, filthy rock and roll will get this and heck, if even the first two tunes don’t get the message across, the start of the next one will.

Depending on your hearing, “Grave Digger” might start off as either an homage to AC/DC or a snarky reminder of the last thing an all-night rocker wants to hear first thing on a Sunday morning but in reality, it’s an announcement that Speedbilly ain’t just fans of monster cars but good golly, they dig ’em some monster trucks too. Yee haw! Big tire, loud exhaust, fuel burning, shake the head off your cup of beer, lumber off a civic center dirt floor ramp monster trucks. Red neck you say? Well man, when was the last time you heard ol’ Down South Hank sing about monster trucks? That’s what I thought. But just in case at this point you’re thinking, “A bit of dip and pumped up rockabilly hard rock might be cool”, Speedbilly don’t disappoint blasting though the barely over two minute romp of “Light ‘Em Up” and honestly, I couldn’t think of a better last call kind of tune to send all the hillbilly speed freaks home.

So to wrap things up and toss ’em in the hatch, this latest EP from Speedbilly ain’t rocket science — not even close. It’s more like 12 minutes of intense dirty fun perfect for a backporch PBR bender. Heck, might even call for throwing some cheap dogs on the grill. Don’t even need shoes for this stuff but be warned, if you’re more of fresh new rock tee dude coddled by the likes of sensitive, polished AOR, then you might just wanna pull off at the next rest stop until Speedbilly smoke on through.

Speedbilly‘s “Petal To The Metal” video: