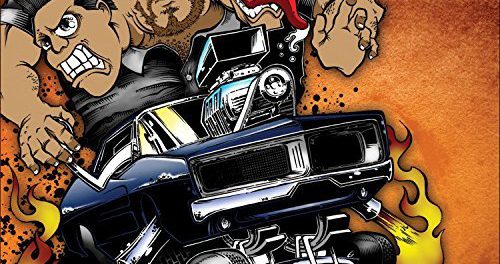 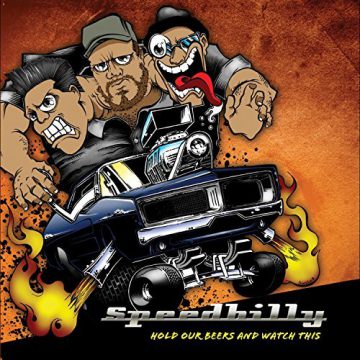 SPEEDBILLY
HOLD OUR BEERS AND WATCH THIS
Released on September 1, 2016 (Arbitrage Records)

Review:
When I was a kid, one of my favorite television show to watch was The Dukes of Hazzard even if I found some of the television scenes silly and kinda stupid — mostly surrounding Sheriff Rosco P. Coltrane — and that was my perspective as a  child attending grade school! As an adult, it’s hard watching those Dukes of Hazzard episodes now and I never could bring myself to watch the movie that was done in 2005 featuring pop singer Jessica Simpson.

Having to revisit the Dukes of Hazzard via the song “General Lee” on Speedbilly‘s four-song EP Hold Our Beers and Watch This is uninspiring at best. It’s just something that I don’t really care to do. Obviously, Speedbilly don’t take themselves too seriously with their album title (Hold Our Beers And Watch This), the song topics such as the General Lee from The Dukes of Hazzard television show and souped up tractors converted to race in “Full Pull”, and a silly cartoon album cover. The music on Speedbilly‘s Hold Our Beers And Watch This is “listenable” but not compelling in any way. It’s a collection of songs that I don’t care to listen to and will likely never listen to again after this review is completed. If anything, it highlights the problems with music these days. Just about anybody can put together some songs on a CD and release them. Speedbilly‘s songs are rough around the edges in just about every facet. I hate the horrible sounding bass at the beginning of “Malachi Crunch” and the guitar “riffs” from axeman John Stegner are more annoying than anything else. Whomever is handling the majority of the vocals — bassist Jimmy Allen Moore or Stegner — is only a step up from one of the worst singers around these days — former W.A.S.P. guitarist Chris Holmes.

The good news about Hold Our Beers And Watch This is that all of the songs are pedal to the metal type songs which makes them somewhat bearable. I hate to be negative towards a “new” band or at least one that doesn’t have a lot of albums under its belt but Speedbilly‘s Hold Our Beers And Watch This EP is a subpar album whose songs would have been better off left inside the confines of a garage than on a CD for the whole world to hear.

Full Pull from the Hold Our Beers and Watch This E.P.