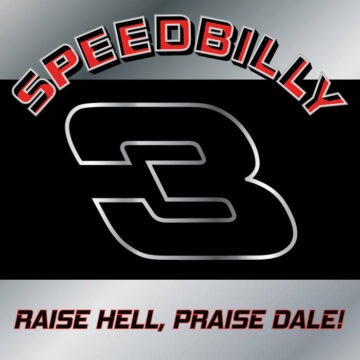 Review:
Every couple of years, Minnesota’s Speedbilly see fit to drop an EP into the ether of the Sleaze Roxx headquarters, and it must be that time again as we are confronted with the band’s third effort Raise Hell, Praise Dale!, following 2019’s Hillbilly Speed Freak, which was, quite correctly in my opinion, much maligned at the time of its release.

Proceedings for this one kick off with “Doin’ It For Dale” played at breakneck speed and, it must be said, rather tunelessly with drummer Brian Gordon actually sounding like he is hitting tin cans or saucepans and the lyrics – such as they are – not really seeming to fit with the flow of the instruments. We have no idea who Dale is or was, but I’m fairly certain he wouldn’t be particularly touched or impressed by this extremely poor effort at a tribute. “Drop The Hammer” follows, played pretty much at the same speed with the title lamely shouted at various intervals for no apparent reason.

Things slow down ever so slightly with “Meth Gators” which seemingly focuses on the fact that using the substance is akin to being bitten by these dangerous denizens of the Minnesota swamps. An attempt at social commentary? Of course not, as that would require thought and a modicum of talent, neither of which are at all evident here. “Straight Pipin’ My UFO” ends this release and did at least make me laugh with its completely inane lyrics and tribally shouted title.

The punk ethos that anyone can get up and form a band is often to be applauded and welcomed but, in some instances, it really is inadvisable to carry on doing so and, sadly, this is one of those instances. There is nothing inherently wrong with being influenced by your Motörhead and Dead Boys albums and then trying to fuse it with hillbilly country as it has been done before and very successfully, but that isn’t the case here.

Perhaps we’re not in on the joke? Perhaps these good ol’ boys are having a deep South style guffaw at our expense? If that is the case, then this badly played, sub-standard demo style EP that sounds for all the world like it was recorded in a bucket, is very ironic indeed.