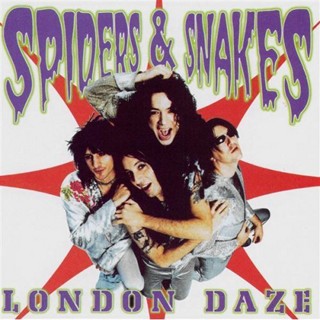 Review:
In case you missed Spiders & Snakes‘ London Daze album when it was first issued in 2000, Deadline Music is giving you an opportunity to catch it the second time around when they release it as a midline title. For those that don’t know, Spiders & Snakes is fronted by singer and guitarist Lizzie Grey who has crow-barred his way into every documentary and television program having to do with the ’80s Sunset Strip music scene. Lizzie was prominently featured in the film ‘The Decline Of Western Civilization: The Metal Years’ with his band London — he and singer Nadir D’Priest sure talked big, but in the end the group never made it despite name dropping everyone who was in the band at various incarnations. In the end Grey came off as a blowhard with ‘high expectations’ and ‘unrealistic dreams’.

Nadir D’Priest went on to have moderate success when he broke rank from Grey and took London with him and released the album Playa Del Rock. Not to be outdone, Grey formed Spiders & Snakes and kicked around for a few years releasing albums such as 2000 Retro and Astropop. Unfortunately those albums went unnoticed and it was back to the drawing board for Grey. In 2000 Spiders & Snakes launched London Daze, which was a mish mash of previously issued London tracks that Grey and Co. recut, Motley Crue‘s “Public Enemy #1” (co-written by Grey), a cover of Mott The Hoople‘s “Rock And Roll Queen”, a handful of original compositions, and three demos from 1980 featuring Nikki Sixx on bass and Nigel Benjamin on vocals.

As a whole London Daze is a disappointing affair — the saving grace are the 1980 London demos, as they take you back in time to the band’s beginnings and give a snap shot of the group in its infancy. While the songs aren’t a home run — they are demos — you can hear the potential of the line-up. I do take offense to Grey reusing material from his past though, and it’s even more ill-advised when he decides to take over the lead vocals.

Spiders & Snakes record some ‘good’ renditions of the London classics “Nonstop Rock”, “Party In Hollywood”, and “Public Enemy #1”, and the Motley Crue cover captures the energy and urgency of a hungry London playing the Los Angeles club circuit in the ’80s. Sadly there isn’t more on London Daze like the aforementioned to make this collection a ‘must buy’ the second time around. Instead you get an uncharismatic, at times forced, and haphazardly put together record.