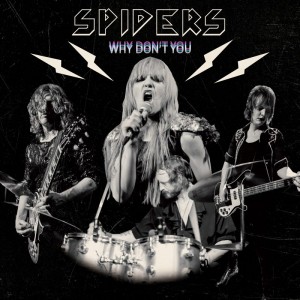 SPIDERS
WHY DON’T YOU
Released on October 16, 2015 (Spinefarm Records)

Review:
For what seems to be a couple of decades, I have longed for the days when bands released at least one album every year. Groups like KISS and Alice Cooper sometimes released two albums per year back in the 1970s. Even in the early to mid ’80s when I first started getting into hard rock / heavy metal, my expectation as a fan was that a band would come up with one new studio album every year. With album sales for the hard rock / heavy metal genre dwindling to a tiny fraction of what they used to be and more and more bands having to release albums themselves, it is unrealistic to expect every band to release a new studio album every year.

Although the Spiders did not apparently release any new material in 2013, they have done so in 2011, 2012, 2014 and now 2015 with their EP Why Don’t You and for that I am grateful. Accordingly, I am not going to complain that the Swedish rockers’ latest album output consists of only three songs and one of them is a cover of an ABBA song of all things. How very Swedish of the Spiders! Had I not known that the song “Watch Out” was an ABBA song, I would have thought that it was an original Spiders song because it fits seamlessly with the other two tracks offered by the Spiders on their new EP Why Don’t You. I also find that the Spiders‘ rendition of “Watch Out” is way better and heavier than the ABBA version. It appears that the Spiders took the best elements from the ABBA song while putting their own stamp on it. Since the Spiders did such a great job of transforming the ABBA song “Watch Out” to make it their own, I am more than happy to be subjected to more ABBA songs if they get the Spiders treatment.

The title track “Why Don’t You” would have fit very well on the Spiders‘ very good prior album Shake Electric and it is the best track on the three song EP. The song rocks from start to finish and has that almost obligatory ’70s vibe so prevalent in the Spiders‘ music that I have came across to date. The Spiders‘ new three song EP closes with the track “In A Room” which also has that real ’70s vibe and is the weakest track out of the three on the EP but by no means a bad song. I simply prefer the first two tracks over that one.

The Spiders do not depart from their retro ’70s sound with Why Don’t You. Rather, the band provides two new songs and a cover song to keep fans satisfied and interested while giving the group an excuse for something to tour behind. More bands should follow the Spiders‘ lead as the three track EP Why Don’t You is a great way for the Spiders to keep their fans including myself interested.