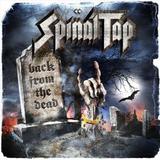 Review:
The world’s funniest and most popular ‘fake’ band is Back From The Dead, but it raises the question… should classic moments remain dead? In the case of Spinal Tap you can make yes and no arguments. As the down-on-their-luck metal heroes of the This Is Spinal Tap rockumentary the group blasted their way into pop-culture, yet as an actual recording artist they aren’t as essential. Yet an album that displays a band who for the most part are living completely off their past seems very appropriate for Spinal Tap.

With 13 re-recorded classics and 6 brand new compositions, Back From The Dead doesn’t always capture the dry-humor that made their movie so flawless, but does offer the odd gem. The title track for instance is a combination of good and bad, at times rocking and at others annoying. “Rock ‘N’ Roll Nightmare” is one of the band’s better songs with a rocking groove while the hilariously titled epic “Short And Sweet” doesn’t really go anywhere. And of course the classics like “Tonight I’m Gonna Rock You Tonight”, “Rock ‘N’ Roll Creation” “Heavy Duty”, “Big Bottom” and “Stonehenge” are all included in re-recorded versions – I could have lived without a funky version of “Sex Farm” however.

The real saving grace on Back From The Dead is the bonus DVD and the packaging. The album packing has to be seen to be believed, so I won’t even go into detail about it (aside from the fact that I almost got into an accident trying to get the CD out while driving!), while the DVD finds St. Hubbins, Tufnel and Smalls bickering back and forth as they reminisce about the songs on this album. Who knew that Sir Mix-A-Lot ripped off the band or that jazz is a music form based on fear? The DVD shows that these guys haven’t lost their sense of humor, and just by watching you yearn for a follow-up to their cult classic theatrical release.

Back From The Dead is pretty much what one would expect from Spinal Tap, a release from a band past their prime, which is exactly what the original movie was about! Sadly this album will mostly be remembered for being drummer Gregg Bissonette‘s final recordings, as I’m sure he will pass away from someone else’s swine-flu any day now.