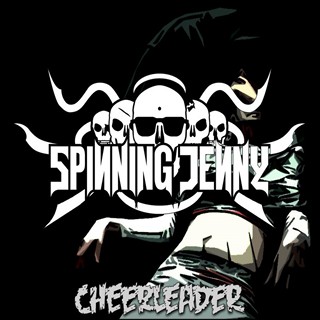 Review:
Another band from Sweden, Spinning Jenny, has entered the scene with a new EP/three-song single titled Cheerleader. Led by lead vocalist and guitarist Patrik DeChrist, it doesn’t take long to hear his metalcore influence on a band attempting to cross over into the hard rock genre.

“Cheerleader” is the lead single and was released in conjunction with a video for the song. Essentially you get a horror movie script set to song. Which came first, the idea for the video or the song? It’s hard to say because the two are tightly connected. A cheerleader has been murdered by a chainsaw wielding slasher and is ‘on the run’ — the video has a Friday The 13th vibe to it, but then the surprise ending (spoiler alert) is that it’s a cheerleader doing the murdering. Actually, doesn’t this occur often in Texas? Anyway, the song itself is dark and after a couple listens sticks with you — it could have been a huge hit for Alice Cooper back in the day. DeChrist‘s gravelly voice compliments the heavy bass and drum tracks, leaving you nodding your head along… and possibly terrified. The other two tracks, “Dirty, Fast And Furious” and “Straight Out Of Hell”, show potential, but lack the hook of the lead single. It’s the sound of a band trying to find their niche, and not fully committed to leave their metalcore past.

I enjoy seeing video and song come together as it does for Spinning Jenny and “Cheerleader” — a heavy track, chainsaw voice, and horror inspired lyrics will have you rooting for (or against) the cheerleader on the run.