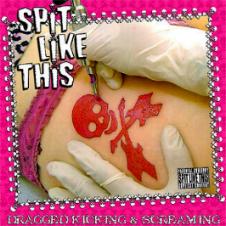 “Rebel Lover” is my favorite track on this three song EP. It is an up-tempo rocker with sophisticated lyrics and a horn section that is applied at all the right times – a very nice addition, and it fits the song perfectly. Vocalist Lord Zion has a very unique voice, sometimes reminding me of Meat Loaf. “Who Needs You” is much the same, and while still a cool song, just not as good as the opening track. “Obscene” has some pretty cool drum rhythms, but ends up being the least enjoyable track.

If members of the D’Molls and Beautiful Creatures joined forces to become Meat Loaf‘s backing band during the Dead Ringer era, they might sound something like Spit Like This. All in all this is a short but sweet release, and you can hear it for yourself at www.spitlikethis.com. Besides, even if you don’t like the music, you can at least spend some time drooling at pictures of bassist Vikki Spit.