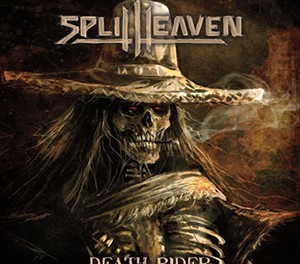 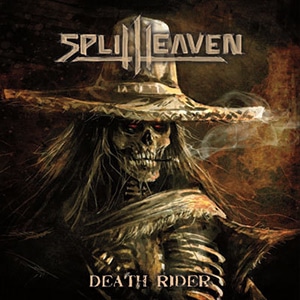 Review:
Split Heaven are a band from Mexico that plays classic speed/heavy metal ’80s style. They are part of the throwback movement of traditional metal outfits that’s been coming in recent years, mostly from Sweden. Death Rider is their fourth album to date and the first after some dramatic line-up changes. I was eager to listen to the album since it was first announced and find out how those changes would impact the band.

Split Heaven‘s previous album, The Devil’s Bandit, was a very enjoyable album but after a number of listens, I can say that Death Rider feels a lot more consistent and shows a band that is more confident to expand and grow. The material does seem tailored to fit new vocalist Jason Conde-Houston (Skelator), which is a smart move from them considering the great work done by former frontman Eligio Valenzuela on The Devil’s Bandit.

All the songs are a great representation of the old school heavy metal from the ’80s and even the production reflects the era. Highlights include the title track “Death Rider” with its early Iron Maiden-style gallop. “Battle Axe” is also a great tune featuring fantastic guitar work that both musically and lyrically carries the force and spirit of the true metal that Split Heaven represent.

The single “Speed Of The Hawk” is another great track full of riffs that produces plenty of headbanging galore. The last two songs are in Spanish, which in fact was surprisingly pleasant in a world dominated by English-speaking bands. The very last song “Destructor” is quite amazing closing the record with a bang.

It’s a fact that vocals with this style of metal — as it is in most metal sub-genres — are an important component. Conde-Houston plays his part well delivering clean singing with super high wails. However, the rest of the musicians — drummer Tomas Roitman, guitarist Armand Ramos and guitarist Carlo Hernandez — all do a great job. All these guys were obviously raised on a healthy diet of Judas Priest, early Metallica, Accept and the like.

I’m happy to say that Mexico’s Split Heaven is right up there with the cream of the crop of the NWOBHM revival, a movement which has gathered pace mainly enforced by Swedish bands like Katana, Steelwing, Enforcer and Lancer. Death Rider is rather solid and executed quite well. It’s not reinventing the wheel by any means but it’s obvious that the band hasn’t set out to do so. The whole ’80s throwback wave is, at its core, an homage to the metal classics that many of use grew up listening to.

If you like classic heavy/speed metal and you’ve read this far, you know what you’re getting from Split Heaven and their new album Death Rider. A very solid traditional metal album that is worth looking into, which make this fellow Mexican proud and an easy album to recommend!