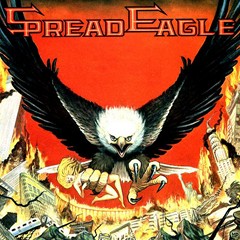 Review:
One of the sleaziest albums of the genre is definitely Spread Eagle‘s self-titled debut. By looking at the song titles, with names such as “Back On The Bitch” and “Hot Sex”, I think anyone could figure out what they are in for.

This was the first of the two albums released by Spread Eagle in the early ’90s, followed by Open To The Public three years later. This album is pure sleaze from start to finish and delivers a powerful punch. It’s one of those CDs with a ‘fuck you’ in your face attitude. It was created by singer Ray West, guitarist Paul DiBartolo, bassist Rob DeLuca and drummer Tommi Gallo and includes a mix of screeching/screaming vocals, shredding guitars, fast drums and a heavy melodic bass.

Songs such as “Scratch Like A Cat”, “Broken City”, “Spread Eagle”, “Suzy Suicide”, and “Switchblade Serenade” are real rockers! There is also a haunting ballad called “Thru These Eyes”, which is another great song on the album. This album isn’t a rock/pop mix, it is all sleaze and hard rock, in the vein of bands such as Faster Pussycat and Skid Row.

Spread Eagle was originally released in 1990 (and later reissued in 2006), which was the beginning of the end for hair metal, so unfortunately this album never made much of an impact on the music industry and consequently never got much recognition. It was just one of the many albums of that time that got lost in the shuffle. You can still find the album online for a fair price though, and it is worth the money!