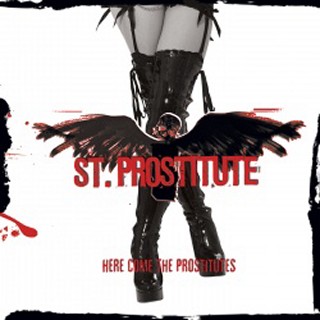 Review:
To be honest, I’ve been waiting awhile for this debut album from the Danish band St. Prostitute. I’ve been following the band since 2009 (when they were called L.A. Prostitutes) up until now, and was even fortunate enough to visit them in the studio while recording Here Come The Prostitutes.

Here Come The Prostitutes consist of ten songs — three of them being re-recorded versions from the band’s first EP Get Drunk Or Try Dying, and the rest of them are brand new. Their music is inspired by the L.A. music scene of the late 80’s/early 90’s and they sound a little bit like Danish bands such as D-A-D and Bullet Train Blast. The songs are well written and the band displays how a great rock song/melody should sound like. They combine great guitar riffs with a solid rhythm section, and Fussy Korsholm‘s voice fits perfectly with this kind of music.

What I really like about Here Come The Prostitutes is the way it’s built up with fantastic rock songs and good power ballads. Just listen to hard rocking songs like “Here Come The Prostitutes” and “Schizophrenia”, but also to the power ballads “Dreaming Of You” and “A Bitter Man’s Lullaby”. I also recommend you check out “Say When It’s Over” and “I’m Not Falling” — the latter being a duet with Fussy and Danish singer Line Krogholm, whose voices fit perfectly together. All in all Here Come The Prostitutes features ten well written songs which gives the listener a great experience — and I can assure you, that when the last song is over, you will want to put the album on again.

The album was recorded in Medley Studios in Copenhagen, Denmark with producer Soren Andersen, who has worked with artist like Artillery, Mike Tramp, Essence and Marco Mendoza, and he has even played live with Dave Mustaine, Glenn Hughes and Mike Tramp to name a few. He gives this album a polished sound, but at the same time not too polished — St. Prostitute still seem to achieve the nasty attitude and dirty sound that I think the band was aiming for.

St. Prostitute is a band to watch out for, and I think they’ve got what it takes to make it. They write good songs and melodies and they can all play their instruments exceptionally well. I recommend you check out this band if you like classic hard rock with a little twist of punk and an all round great attitude. Horn’s up — rock ‘n’ roll is alive!