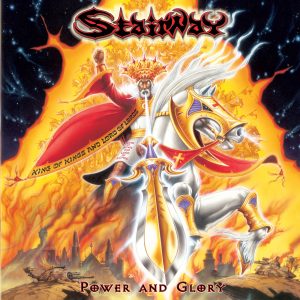 Review:
Stairway are a band out of Staffordshire, UK with roots in the New Wave Of British Heavy Metal scene, dating back to their first independent release in 1985. Their debut album No Rest : No Mercy brought the band to international popularity. The band continued to work live, and independently released in 1999 the album Bleeding Heart. From there, they have had a plethora of new releases throughout the 2000s, culminating in 2016’s Power And Glory.

The record starts with “Lucy Fuhr” — a rocker to be sure. But I may as well get this out of the way right off the bat. The production on this album sucks. The guitar sound is awesome and in your face, but the drums fade into the background, and the bass is non-existent. I’m not sure if it’s because I don’t like Graeme Leslie’s dull and uninspired vocals, or the vox isn’t mixed properly, but the impact of the entire album gets lost somewhere.

“Fatherless Child” is a nod to the NWOBHM scene, with heavy guitars and dark lyrics. “Overture 1418” is the type of filler piece I hate, at less than a minute with no particular place to go. May as well have tagged it onto the beginning of “A Mind Insane.”  I can actually hear the bass on “A Mind Insane” if I listen hard enough, and it’s a pretty good line to run on. There’s just something about the vocals I’m not in tune with. “Sun Of Malachi” is a mammoth 15 minute track, which starts with birds chirping and a quiet instrumental intro. It reminds me of Pink Floyd’s “Echoes” but not in a good way. As I fast forward through the mess, I discover some psychedelic speed metal interspersed with acid trip vocal quazi-harmonies.

In my opinion, the best song on the album is “Godz” with powerful guitars working overtime and a solid drum line. It’s almost Iron Maiden like. “World In Black” starts with pumped up drums, but again fails due to poor production and poor vocal quality.  I would say Scorpions’ “Animal Magnetism” without the magnetic hook.  I am now faced with more filler in “Interlude 23” — a minute and 15 seconds of wafty keyboard stuff.

I could go on, but I think you get where I’m going with Power And Glory. With a band having such a background and ongoing efforts, I wish I could say more about this album. The guitar sound is impressive, but it is not enough for me to keep listening to this album in its entirety more than two or three times.

Stairway- ‘A Mind Insane’ – from ‘Power and Glory’Buy from: www.stairwaymusicstore.bigcartel.comLyrics:We lead the life we’re living,We’re dragged across t…