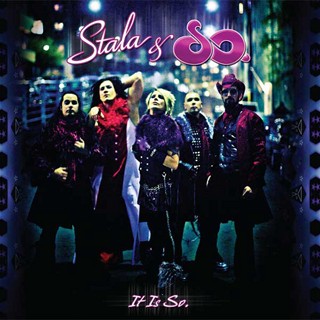 Production:
Produced by Stala & So..

Review:
If you dare climb on a merry-go-round that features the good old glam rock music of the ’70s and early ’80s — such as T. Rex, The Sweet, Hanoi Rocks and old David Bowie — then you will be fine with It Is So, the debut album from Finnish rockers Stala & So.

The band looks cool on their glammy and colorful CD artwork, but if you want to see what the band is all about you’ll have to view their videos to experience how much fun it is to listen to the northern Scandinavian rockers. After the spoken introduction comes “Got To Believe” and thus begins the rocking train journey. “Bye Bye” is the first single/video and is the kind of rock ballad where you strike up your lighters and dream.
Such mid-tempo rockers, sung with rough vocals, as “Woman”, “Got To Believe”, “One Nite Stand”, “Shout”, “My Happy Day” and “Pamela”, knock you out of your sneakers and allow you to have a good time. What else can you expect from a CD these days? To solve your problems overnight? No, music is just there to entertain you and let you forget about the bad times, and Stala & So. do just that.

Charismatic vocalist Stala, who is a big fan of KISS, Twisted Sister and Motley Crue, decided to sing at the age of five when he was at his grandparent’s farm. According to the frontman, when he sang to the cows they produced tasty milk, so his Granny always pushed him to keep singing. That’s a nice story isn’t it? With the music from Stala & So. the milk will never get sour, instead it will have a flavor of vanilla and sugar.

Even the sound production on It Is So is good and up-to-date, not bad for an album that was self-produced, self-recorded and self-written. The members told me that they wanted freedom in doing the record, so they saved all their money to produce it the way they wanted — and I tip my hat at them for that. Musicians that put all their blood, sweat, tears and money in their own music earn as much respect as possible for going the extra mile.

Stala & Co. may not be like the typical hard rock bands coming from Scandinavia these days that play harder music (bands like Hardcore Superstar for example), but they’re very colorful and play a funny kind of rock music — the perfect type to have with a Canadian whiskey. Check them out.