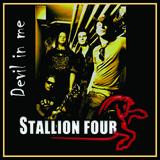 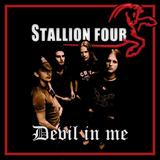 Review:
Leading rock nation Sweden, is the home base of yet another upcoming band. Stallion Four have been around for a few years already and are finally starting to move forward with a 4-track EP called Devil In Me.

What is offered on this EP are four songs which are heavily reminiscent of early 90s rockers Law And Order. This means you won’t get any keyboards, huge background choirs or anything else bombastic, just a pure and simple retro-rock sound with a bluesy touch. The title track “Devil In Me” opens up the EP with an up-tempo style. “Burn” continues in the same vein with a riff which could easily have been written by Kings Of The Sun or Circus Of Power back in the day. The highlight of this short affair is “The Train”, with its southern influence reminding me of the one-off band The Graveyard Train (how many remember this one?). The final song, “Tied Up”, once again is a straight-forward rocker which finally shows traces of AC/DC and has probably the easiest chorus to sing-along to.

Overall Stallion Four have finally managed to get into gear. Singer Bjorn on some occasions could work on some of his screams, but all in all his voice fits in very fine. Fans of Law And Order and southern influenced rock in general should definitely take a chance on this band and put their money on Stallion Four! So grab a copy of this limited edition vinyl before it’s too late!