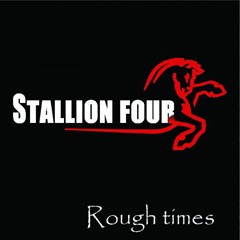 Review:
Last year Stallion Four released a four-song EP entitled Devil In Me which was a departure from the typical sounds coming out of Sweden. Rough Times finds the guys returning with one less song, but they more than make up for it with even more focused and potent music.

I still say Stallion Four sound like a revved up version of Law And Order, mainly due to Bjorn‘s voice, but their sound doesn’t begin and end with that comparison. “Madness” comes blasting out of the gate with grating and screaming vocals on the verge of crumbling to pieces, a straight-ahead yet effective riff, and a chorus that would make the long forgotten Hall Aflame envious (remember their song “Child Of Medicine”?) — the entire package results in the pinnacle of this young band’s already impressive career. The title track is more of the same but without the rocking urgency of “Madness” — however it does pick up steam during the Bullet inspired chorus and has a lot in common with the group’s debut EP. Ending this entirely too short affair is “Troublemaker”, another kick-in-the-ass hard rocker that conjures up images of Twisted Sister as it comes close to transforming into a fist-pumping anthem.

Stallion Four are a great new band, and one that hasn’t jumped onto the Crashdiet/Hardcore Superstar bandwagon that seems so popular among Swedish musicians these days. Instead Stallion Four stand out from the crowd while delivering a shot of adrenaline to the listener. I think it is time for a full-length album from these guys — they’ve more than proved how talented they are in the short two years they’ve been on the scene. The recent announcement that the band has added a second guitar player can only flesh out their sound even more!