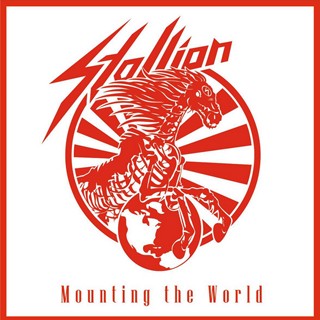 Review:
Raw and unbridled metal at its finest — that is what comes to mind when listening to Stallion, the latest heavy metal band to come out of Germany. I actually know very little about Stallion, but a good friend turned me onto them a few months ago. Upon revisiting their EP Mounting The World I found that there was at least one really good song on the release.

Although the band is often described, and rightfully so, as speed-metal, I find that a lot of the songs would best be described as power or old-school ’80s metal. Sure, a song like “Shadow Run” can only be described as a speed-metal, however it is probably the worst out of the six songs offered on Mounting The World. The rest of the tracks are mostly somewhat melodic, yet raw and furious all at the same time. My favorite is the aptly named “Canadian Steele”, which has old-school Ron Keel shrieks scattered throughout. Another good one is “Give It To Me”, the ‘slowest’ and sleaziest rocker on the EP — aside from the unfortunate and unnecessary speed-metal portion towards the end. The closing “Heavy Metal Rock N’ Roll” showcases what Stallion can accomplish by taking the foot off the pedal for just a little bit and concentrating on catchier songs.