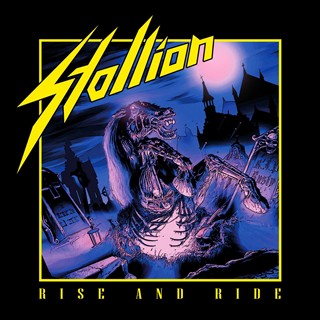 Review:
What is old is new again — that’s the best way I can describe the reinvigorated global metal scene. Going to heavy metal shows these days is almost like stepping into a 30 year time-warp as I witness not only the music styles but also the garb of the fans. Cutoff denim jean jackets over black leather covered with studs and band patches are back in full force! The (mostly) new speed-metal band Stallion have definitely embraced this look and sound to a T.

This year Stallion have also become a proper band with vocalist Pauly and guitarist Axxl adding three members to complete a dual guitar attack and rhythm section. The German group’s latest release Rise And Ride continues exactly where their EP Mounting The World left off as they continue their back-to-roots classic speed-metal mixed with hard rock sound. Rise And Ride definitely borrows a page from early-’80s ‘new wave of British heavy metal’ influenced by… the heck with it, let’s just call their sound ‘Metallica meets Exciter circa 1984′. Fans of those two bands from that timeframe will most likely fall in love with Stallion instantly as the riffs, guitar work and vocals sound reminiscent of the Kill ‘Em All and Violence & Force eras. The dual lead compositions from Axxl and Olli Gee “El Gigante” hold up to early James Hetfield and Kirk Hammett while Pauly‘s vocals cover the same high pitched tenor terrain that Dan Beehler‘s captured in early Exciter.

Most of the compositions on Rise And Ride are fast with a tightly controlled fury. Wasting no time, the album thunders into the title track “Rise And Ride” — beginning with a small speech about ‘a stallion coming to unite the rebel nations’ from someone sounding like an old Lord Of The Rings wizard. The other new songs, “Wild Stallions”, “Streets Of Sin”, “Stigmatized” and “Wooden Horse”, cover the aforementioned Metallica meets Exciter territory. We also see two re-recorded tracks, “Canadian Steel” and “The Right One” from the Mounting The World EP to round out a ten track album.

While the tracks are aggressive and filled with metal mayhem, I do not detect a lot of the anger nor angst that most speed-metal bands have. No, there’s a youthful innocence found in Stallion‘s sound. The band is young, exuberant and obviously not taking themselves too seriously while having fun with their passion. The band seems to be on the fast track to success as they are already being invited to play at large metal festivals around Europe and have opened for Bullet earlier this year.