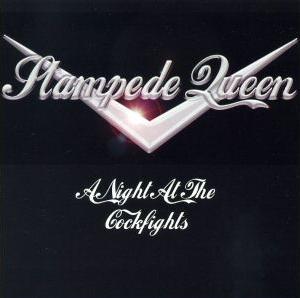 Review:
If the thought of Kiss‘ Gene Simmons fronting Aussie rock legends AC/DC turns your stomach you may want to steer clear of this release. As nauseating as this combination would sound to some people (myself included), strangely enough A Night At The Cockfights makes for one incredible release. Canada’s Stampede Queen manages to combine three-chord guitar rock with tongue-in-cheek lyrics for an irresistible listen.

Things kick off with “Never Turn Your Back On Rock ‘N’ Roll”, a no frills rockers that has a chorus reminiscent of Britny Fox. I have no clue what was going through the band’s heads when “Daisy Mae” was written, with lyrics like “she’s looking so out of sight, and I know she’s my sister, I couldn’t stop when I kissed her”, but who cares – it’s a great song and proves that these boys have a sense of humor. “Dee Dee Dominator” kicks off with a cool guitar riff before Zodiac Mindwarp influenced vocals kick in. The remainder of the disc never lets up, spewing out guitar riffs that rival anything AC/DC has done in years.

The real gem though is “Woman In A Fast Car”. This is the most addictive song I’ve heard in ages. In fact, even my work crew, who often think my musical tastes border on pure shit, kept hitting repeat on this tune. If Kiss still had the fire and desire this is what they might sound like (if they were lucky). I can’t say enough good things about A Night At The Cockfights. Pure rock fans will love it — I know I did. Check out www.stampedequeen.com for more information.