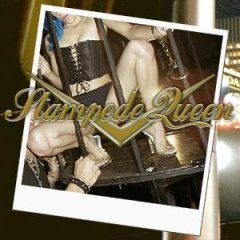 Review:
Stampede Queen‘s A Night At The Cockfights was a flawless album, so to say I was looking forward to their newest release would be an understatement. My first thought on this self-titled CD was disappointment, but that quickly changed with each listen. Stampede Queen‘s debut was a fun hard rock album, nothing more and nothing less, but this follow-up is more varied and takes more chances. It took me longer to appreciate what was going on, but once I did I was once again floored by one of Canada’s greatest rock bands.

Don’t get too scared though, this disc still rocks. “Kari Baby”, “In It For The Money” and “Ain’t Lookin For Love” still possess that Stampede Queen boot-stompin’ beat and take-it or leave-it attitude. You can still hear the Kiss influence throughout Stampede Queen, but it isn’t as obvious as on the first album. This time the band comes across like a no-frills rock version of Circus Of Power with some Four Horsemen thrown in for good measure.

One thing that didn’t get lost over the years is the group’s sense of humor. “Baby grab my guns, and put my beers in a sack, cause I’m taking you huntin and you know its only me coming back” is just one example of the tongue in cheek attitude the Stampede Queen boys bring to life (and should I even mention the dogs and blow-up dolls part?). Rock was always supposed to be fun, and these guys are fun and don’t take themselves too seriously.

Have you ever noticed that albums you don’t like at first usually end up being your favorites and keep getting played over and over (unless of course they are complete turds)? Or is it just me that this happens to? Regardless, Stampede Queen is an album that rocks harder then I first thought and adds some variety to keep things fresh. Stampede Queen is a band that more rock fans should check out, because I want them to stick around for a long time!