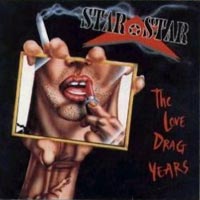 Review:
Star Star is a band that has often been accused of being too punk for rock fans, and too rock for punk fans, and therefore seemed to fall through the cracks of commercial stardom. The Love Drag Years was the bands second release, but first to get wider distribution. Standout tracks include the jamming “Fly Boy”, “Cowboys In Space”, “Groovy Guru Gangster Girl”, “Diggy Dragster” and a cover of the obscure Alice Cooper classic “Nervous”.

While the band wears its glam influences such as Cooper and the New York Dolls on its sleeve, the music itself sounds like a punkier version of Faster Pussycat. The Love Drag Years was pretty good and received rave reviews among the music press, and I also give it two thumbs up! Check out the band for yourself at starfuckerstar.com.