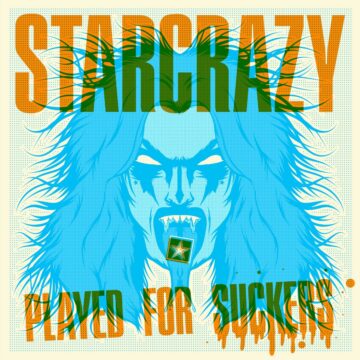 Review:
Well, I gotta admit that outside of the much needed out of nowhere AC/DC punch in the arm to finish up 2020, I really hadn’t expected much of my ear spanking this year to come from Down Under. Yeah, there’s always those AC/DC knockoffs Airbourne waiting around to rear their riffy heads but man, ever since Angus and the boys surprised us with a new one, I keep getting fresh cool Aussie rock and roll coming across my desk. After being turned on to Roadkill (huge thanks for the CDs and t-shirt – will wear with pride), now in my email pops up some shiny new tracks from young Melbourne rock and roll quartet Starcrazy who have not only won over the locals down yonder way but it seems, also rock legend Alice Cooper who reportedly had been pimping the band on his “socials and radio show.” Well if Uncle (or is that Aunt) Alice thinks that Starcrazy are worth a glam rock glance, who am I to argue?

On debut release Played for Suckers, singer Marcus Fraser, guitarist Odin Wolf (yes, “Odin Wolf), bassist JB, and drummer Jack Farmer deliver a six track EP of ’70s power pop meets ’80s glam topped with a hint of the ’90s rock and roll. It’s kind of like if the McDonald twins from Redd Kross shacked up with half of Cheap Trick and made out in an arcade with the members of the Donnas until they noticed that they still had some game tokens left. Seriously, this is catchy and quirky and fun which after the past year is a nice chance of pace and maybe it has something to do with their age or even the mixed influences of David Bowie, Def Leppard, Hanoi Rocks, Mother Love Bone, and Porno for Pyros who the heck knows but yeah, it’s mostly nice breath of fresh flair.

Luckily I tend to sample releases before diving full in because about halfway through opening “intro” instrumental “Rise”, I might have just moved on to another disc but that’s just my “not into instrumental intros” personality. Yeah, it’s got some cool bass thump and the guitar is kinda cool but I could easily have gone for a good two minutes full on song instead but again, that’s just me. Also just as lucky, the rest of the record — you know, the part with the actual songs with vocals and stuff — is pretty dang fantastic.

“Taking Down The Brutes” kicks off the rock and roll portion of Played For Suckers with that same low end before plowing into this sort of Ugly Kid Joe vibe with a bit of an early Skid Row punch to the solo break down. Very little to get bored about on this track and it’s a pretty good setup to “Long Way Home” which finds Starcrazy at their Red Kross meets Cheap Trick power pop tongue-in-cheek best.  Tossing in that Def Leppard influence, “Disturb The Peace” is a chunky, funky rock anthem that might even hint at a love for Boston rockers Extreme as well especially in the choice bass and guitar parts and you might even raise an eyebrow if you think the chants hint a tad the Electric Boys.

Out of all the tunes on Starcrazy‘s first album, the ’70s glammy fun “Gimme Back My Stereo” might be my fave overall what with all the early KISS and Coop feel. OK, so you can hear that Redd Kross thing going on too but they kind of throw it back to the early ’70s themselves right? C’mon, it’s all here from the hook to the riffs to the claps and it might be one of the best glam-inspired anthems of the past long long time. Making it even better is that these young cats top it off by plastering rocking grinder “Not The Only One” right after to finish up things. Once you get here, you kind of finally see where the Mother Love Bone mention comes into play and as a fan of the last band out of Seattle that I really dug heavily, I feel it in inside. A bit of proof that despite being young and carefree, these kids have a sense of where they wanna go and how they plan to get there.

Played For Suckers is an Aussie rock record that doesn’t remotely sound like what the majority of the world thinks of when contemplating Aussie rock. Sure it might be closer to the Silverchair side of things than AC/DC or even, ugh… Airbourne, but in a way, that leans way more towards rock and glam than reupholstered ’90s alternative rock. On this first dish, Starcrazy offer up a nice starter to what has the potential to be a very cool future of catchy rock and roll. Youth might have something to do with the fun (and to a degree geeky) topics and lyrics that could change as they grow but I can only hope that along the way Marcus, JB, Jack, and of course, Odin, find a way to keep the humor intact.

Starcrazy‘s “Taking Down The Brutes” video: