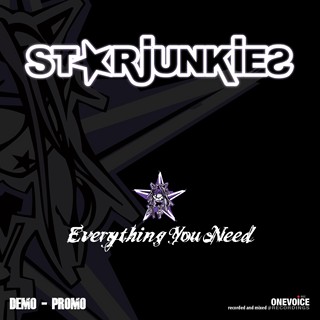 Review:
Italian based sleaze-metal outfit Starjunkies are a hard band to generalize. Taking influence from bands like Crashdiet (strongly reflected in the band’s forced vocals) and pinning their own style to it, this demo is a risky gamble to say the least — five tracks of love, anger and hope, scored with harsh, raw, and heavy hooks.

The title track “Everything You Need” gets things off to a jumpy start — judging by vocal efforts (which sound like an unperfected replication of what Crashdiet‘s Simon Cruz probably sounded like before realizing he could sing!) any kind of virtuoso portrayed by Starjunkies comes in the form of their axe man, suitably named Riff. He takes firm hold of the rock n’ roll reins, leading the band through the stormy tide of the first three tracks and (with much relief) back onto dry land at the final two cuts, with his backbone ability to keep things going.

The baggy bass line of “Still There’s Tomorrow” is chunky and melodic with vocals harsh and raw. Influences are clear in “Motherf***er,” which pays tribute to Skid Row‘s 1989 eponymous debut hit “Youth Gone Wild” with its 2/4 drum timing demonstrated in the track’s introduction. Although magic is scarce, “Shame” is where frontman Davy proves a dark horse. At most, the demo is sung akin to the sound of a straggled cat and becomes hard to stomach after a bit, but not here. Proving he CAN sing, its track four where Davy hits natural, melodic notes in the form of beauty. It’s more grunge than sleaze and operates as the final cog in the grunge-rock works, with a modern day twist — a genre they fit into nicely and should perhaps look at sticking to. It’s a real ‘shame’ though, that no other track on this harsh, angry stricken demo is armed with the type of ‘natural’ melody achieved in “Shame”. A cover of Poison‘s “Look What The Cat Dragged In” is the demo’s final, and also its shortest, track and isn’t half bad considering — but it is through the track’s short time scale that relief is restored.

Nevertheless, the Starjunkies hit the nail on the head when they said, “We are a mixture of sounds.” They are not genre specific and this rather schizophrenic, to-say-the-least, demo showcases everything from sleaze and hard rock and even grunge. Although it’s clear the sleazy sound that vocalist Davy so desperately reached out for during the production of this demo — Sebastian Bach and Simme Cruz to name a few — just didn’t quite meet modern day standards. They’re not the next big thing just yet, but fortunately it’s all thanks to the instrumentation of the band, that when united, brake and bolt with aplomb — which saves this demo from falling completely flat on its face.