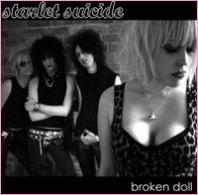 Review:
Starlet Suicide is a female fronted punk-influenced rock band out of Sweden. Vocalist Jennyfer Star, who wrote all the music on Broken Doll, has obviously been influenced by Hole‘s Courtney Love – both in sound and image. She has a gritty voice that is a combination of Love and Joan Jett, but thankfully doesn’t have the need to scream as much as Love does.

I’ll be honest and admit that this type of music doesn’t turn my crank. It is music that is driven by aggression and abrasiveness, but with the lack of memorable guitar solos and harmonies I have always found punk-rock rather boring. With that being said, “It’s A Disease” is as close as the band comes to a straight-ahead rocker and Karl Thunder lays down an addictive beat. The more I listen to that one the more I like it, as Jennyfer teeters between a rough and soft delivery. “You Make My Heart Go” is a pretty cool tune with its chorus that you won’t soon forget and a mellower midsection.

I know the band has talent, as I have reviewed Paine and Thunder‘s other band Paradice (who I enjoy much more) a couple of times, but unfortunately this genre of music doesn’t allow for musicianship to shine. I know some people wet their pants over punk-rock, but I’m not one of them. Ironically an album like this likely has more commercial potential these days then most of the stuff I review. This isn’t something I would buy, but fans of this style should enjoy it. The band can be found at www.starletsuicide.com.