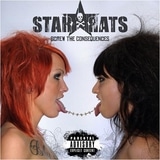 Review:
The Starrats are back in action with their brand new album Screw The Consequences, and a brand new voice. The Danish/Swedish quartet is heavily influenced by the later half of the 80’s, the so-called ‘Decade of Decadence’, and they have already toured extensively with some of the greats from that period such as Skid Row and Britny Fox.

Screw The Consequences is the band’s third album and it is their best so far. While they were just a little bit too punkish for my taste on their previous efforts, this CD is definitely a sleaze album, although sometimes borrowing elements of the action-rock sound from early Backyard Babies and Supersuckers. New singer Magnus reminds me quite a lot of the latter’s Eddie Spaghetti on some of the songs here, for example the cool “Raise Your Hands To Rock” and “Psycho You”.

But Screw The Consequences offers a lot more than just straight in your face rockers, although I have to say not everything works out just right. On the positive side we get the atmospheric “Land’s End” and the melancholic “As I Stay”, which show that the Starrats are capable of writing great rock songs. Then there are a bunch of attitude-driven tracks like the opener “Who Cares!?”, “Mr. Whattafuck”, a revved-up version of Bon Jovi‘s “I’ll Be There For You” and the closing drinking anthem “Boozehound” (with Zodiac Mindwarp‘s Cobalt Stargazer handling the guitar solo). The aforementioned downside to the whole affair is that the tracks start sounding a bit same-ish after a while. This means that you can listen and enjoy a beer to each and every track by itself, but listening to the whole disc at a party gets a bit ‘meh’ after a while. Therefore the album turns out to be sort of a mixed bag.

Don’t let the above statement scare you away from the Starrats though, they are a very cool rock band which sure as hell knows how to spell ‘attitude’, and even more they know how to rock out. The production of Screw The Consequences is exactly as it should be – huge with just the right mix of slickness and rawness, which is mainly because of the mixing qualities performed by none other than Chris Laney.

If you put the best tracks from Screw The Consequences on your iPod you’ll get what you’ve asked for – mighty fine sleaze rock!