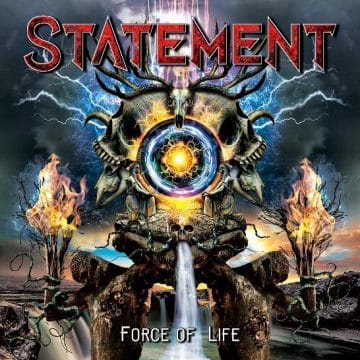 STATEMENT
FORCE OF LIFE
To be released on March 1, 2019 (Target/Mighty Music)

Review:
Formed in 2011, this five-piece band from Copenhagen, Denmark has issued its third release, Force of Life. The album was produced by Soren Andersen — a guy I have come to really respect as a board jockey (Junkyard Drive, Tygers of Pan Tang, Mike Tramp, etc) as well as a solid guitar player in his own right (Electric Guitars, Marco Mendoza, etc). Having this guy on side means Statement ain’t screwin’ around with Force of Life.

Sure enough, the album sounds great! Opening track “The Hero Inside” has scathing guitars and is well written to keep the momentum throughout. “Darkness In Your Eyes” maintains the aggressive tone, and although this isn’t becoming a genuine sleaze album, it’s heavy enough to overcome some of the more melodic rock elements. That said, “Higher Ground” would have been a minor hit on ’80s rock radio, with a straightforward melody and catchy chorus.

“I Wonder Why” starts as good hard rock, but the verse weakens. Right now, in my head, I’m trying to gene splice the power of Volbeat with soaring chorus and vocals Vega-style… and I can’t decide if it’s working. Watch the video below and let me know in the comments. From the first listen to “The Hurt”, my immediate thought was Black Sabbath, with a simple but effective guitar opening and a galloping tempo. Sure, that develops into something a bit less interesting in the verses, but the main line recovers again.

Title track “Force of Life” is the most aggressive so far. Its up-tempo borderline sleaze intro morphs into a pretty good verse/chorus. Yet, at about the 2:40 mark, the whole song goes next-level by a thrash break and power metal solo. Some bands love to take the piss by recording covers of classic tunes as a bit of a joke. Statement’s version of “California Dreamin” (Mamas & Papas) is actually a pretty good metal representation while staying true to the original. It actually gets quite ugly and heavy toward the end. “Rock Your Heart Out” and “Feeling Scared” are modern sounding tracks using grinding vocals and double bass for maximum effect. The mix is heavy and well done. After those percussive, pounding pairings, closing the album is “In This Moment”, the requisite ballad-ish song that is OK if you’re into that sort of thing.

Sleaze Roxx reviewed the 2016 album Heaven Will Burn, and while generally supportive, said, “…individually, each of these songs may be a pretty decent add to a mix tape. However, as a single unit — a record — I find Heaven Will Burn to be disjointed and without focus.”

Force of Life is more focused on what the band does best. I can’t escape the Volbeat/Vega hybrid mentioned above. The combined elements of aggressive intros and softer choruses may work better for the band and its fan base. If you enjoyed Heaven Will Burn, you will appreciate Force of Life.

Statement‘s “I Wonder Why” video:

“I Wonder Why” is released on the 19th of October 2018 on all digital platforms worldwide through Mighty Music. Taken from the upcoming Statement album.www.s…

Statement‘s “Darkness In Your Eyes” video:

“Darkness In Your Eyes” is out on all digital streaming and download services worldwide 30th of March 2018.This is a KIWI MEDIA production! Directed, Filmed …