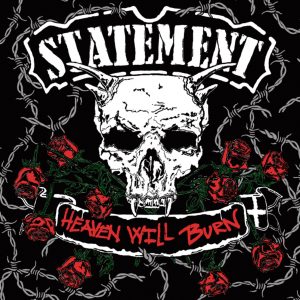 Review:
Statement are a Danish band that have only been around for a few years. Their 2014 release Monsters garnered them significant attention throughout the European music scene. I am not sure why Statement haven’t hit the Sleaze Roxx radar in the past, but based on this new recording, it probably should have been worth a mention at least.

Listening to the opening track “Playing Around” is really enjoyable. An aggressive hard rock song. Vocals are, at some points, a little guttural, but nothing that really detracts from the song itself. Next song “Madness” is pretty cool. I’m getting a biker rock vibe from what I’ve heard so far.

Track three “Created By You” is very rock radio friendly and less challenging than the previous two. I guess every band needs a radio friendly song to get noticed. But now here’s where Heaven Will Burn gets a bit contradictory. “Darkest Hour” is much heavier and darker, with a bit of a Metallica vibe, but not in a good way. “Nightmare” recalls something akin to System Of A Down with its light-heavy-light impact combination.

“Part Of Me” is back to a punk/sleaze feel, but in something like a Nickelback groove. Hard to explain, but it doesn’t work for me. I guess it’s not a bad rock song. And now to the album’s title track and first video “Heaven Will Burn.” This song as a composition has nothing legitimately to do with the rest of this record. It is a Foo Fighters knock off that is so far removed from most of the songs on the record that it stands out as unusual.

“A New Beginning” would be a great start for half of Heaven Will Burn. Interesting metal riffs, but again, back to something of a formula. “A Fire Burns” is much harder than the rest of the record… sort of.  It starts out as power metal, then regurgitates a now rote chorus. “Sleazy Fantasy” isn’t bad and it almost lives up to its name. Again, although pretty heavy and aggressive, it harkens back to the first couple of cuts on this album.

The point is, individually, each of these songs may be a pretty decent add to a mix tape. However, as a single unit — a record — I find Heaven Will Burn to be disjointed and without focus. Below will be the link to the title track nut I urge you to look deeper before deciding to purchase.