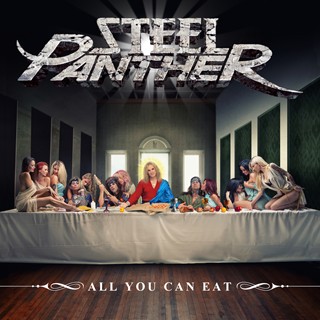 STEEL PANTHER
ALL YOU CAN EAT
Released on April 1, 2014 (Open E Music)

Review:
The ‘law of diminishing returns’ states that Steel Panther should have reached their expiry date a couple years ago — obviously there are exceptions to every rule. The band’s latest slab of brilliance proves that the well filled with perverse bathroom humor is far from running dry.

Steel Panther have managed to penetrate the mainstream because of their tongue-in-cheek delivery, one that both pays homage to ’80s hair metal and exposes the genre’s ridiculousness at the same time. But that joke would get old fast — what really keeps Steel Panther interesting is the music itself. All You Can Eat ranks right up there with the band’s previous efforts, and is easily their most diverse. Think of it this way — rather than 12 songs of repetitive missionary sex, Steel Panther opened up the Kama Sutra manual and picked out a few complicated positions that would cripple less experienced lovers.

I often find myself singing along to the tracks on All You Can Eat, and then shaking my head with a laugh at the ludicrousness of it all. “There was so much spunk of your face I couldn’t see the tears”, “If I was the King Megan Fox would be my Queen, but I’d still fuck Christie Brinkley and any girl older than 16”, and “B.V.S. (big vagina syndrome) is a bit like shooting hoops with a tennis ball, it’s easy to get it in there but it doesn’t satisfy at all” are just a sampling of the words of wisdom spewed throughout All You Can Eat.

There are people who love to hate Steel Panther — ones that are so passionate about ’80s hard rock that they are unable to see some of the genre’s flaws. It is those type of people that Steel Panther are targeting — if you’re not in on the joke, you’re the brunt of it. For those people I suggest you look past the silly lyrics and just enjoy All You Can Eat for what it truly is — a top-notch hard rock album. Besides, the ’80s rock scene was all about excessive partying and screwing as many groupies as possible, so what’s the harm in exploiting the very things that propelled it to stardom? Eventually Steel Panther‘s shtick will get old and they will run out of sexually charged ideas — but seeing as they haven’t recorded songs about ‘donkey punches’ or ‘Cleveland steamers’ yet I’d say they have a few more killer releases ahead.