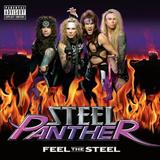 Review:
Steel Panther are, by far, the greatest 80’s band to… well, not come from the 80’s! Their debut album Feel The Steel oozes with so much sleaze that the CD should come housed in a 50 gallon drum. How appropriate is it that this album is being reviewed for Sleaze Roxx?

The undisputed kings of the Sunset Strip have been together since 2000 when they appeared as Danger Kitty in the now-infamous Discover Card commercials. The band has undergone several name changes in the last nine years, from Danger Kitty to Metal Shop, then to Metal Skool and finally Steel Panther. Even with all the name changes, these guys fucking rock and they sure as hell do not take things, or themselves, too seriously.

I usually try and review an album track-by-track, but seeing as this album is so exceptional I know I would go on and on forever. Instead I will just point out a few of my favorites, which will be difficult as there isn’t a dud in this twelve song helping of sex, drugs and rock n’ roll! Their debut album kicks off full throttle with “Death To All But Metal”. The tune rips everything popular on MTV and other corporate ‘music’ outlets that try and tell us what’s hot and what’s not. This cut was also the first single released to radio and the second video from this album (the video for “Fat Girl” had been previously issued back when the released their EP Hole Patrol).

Slipknot‘s Corey Taylor guests on “Asian Hooker”. The track, with its Asian-influenced guitar intro will have you pissing yourself with laughter, especially with the line, “Suck it, fuck it, smells like sushi”. The ballad “Community Property” is a tongue-in-cheek, and a few other places on the female anatomy, look at the life of a rockstar while on the road with a loved-one at home. This song is sure to be a huge hit with wives of touring musicians. My favorite song on the album is hands down (or pants down if you are a female in my presence) “Eatin’ Ain’t Cheatin”. I’m sure guys can relate when your girlfriend is caught giving an oral favor to another male, well, as they say, paybacks are a bitch!

“Party All Day (Fuck All Night)” starts out eerily reminiscent of Bon Jovi, but with a lot more talent and a lot less cheese, with the exception of Richie Sambora who, I believe, is the only person who lends any credibility to that shitty band! (NOTE: The previous statement is not a fact, just my opinion. So Bon Jovi fans, don’t get your spandex in a twist.) The song is a great party anthem, hence the title. “The Shocker”, I’m sure, will make feminists worldwide a tad pissed off and Tipper Gore‘s asshole pucker but the track is just that damn hilarious. Back in the 1980’s would you have ever imagined a chorus that went, “Two in the pink and one in the stink, that’s called the shocker”? Doubtful, what great times we live in today.

“Girl From Oklahoma” is a touching, dare I say, ballad that heaps praise upon the groupie culture. Complete with a Poison name drop and a subtle PSA warning against the effects of V.D. I’m sure girls in Oklahoma are looking at each other while listening to this song telling their girlfriends that Steel Panther isn’t talking about them. What Metal CD would be complete without a song about Satan? Steel Panther end this masterpiece with a track that AC/DC would be extremely proud of, the lyrical content as well as its nod to the late-great Bon Scott.

All the joking and humor of the songs aside, Feel The Steel is amazing! Stellar musicianship, amazing vocals, lyrics any rocker whose heyday was in the 1980’s wished they wrote and top-notch production make this album my pick, hands down, for the ‘best album of 2009’! I’m not too fond of the band being labeled a “parody band”; parodies are what you expect from Weird Al Yankovic (nothing wrong with the Weird one)! This band excels in lyrics, while comical in every way, that exude all that Rock N’ Roll stand for… sex, drugs and one hell of a good time! Not enough can be said for the brilliant guitar shredding, killer bass chops, and drumming that Tommy Lee would have been proud of before he pulled the opposite of Michael Jackson and changed ethnicities.