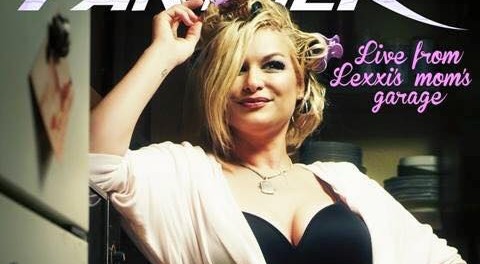 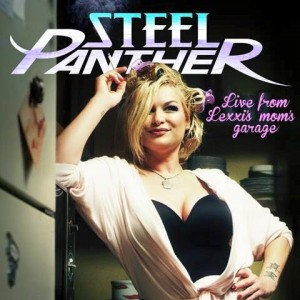 Review:
“Everything you hear tonight is completely live, unless you’re watching this on video, and it’s been fixed in the studio” — Satchel

Live from Lexxi’s Mom’s Garage is a solid album. Steel Panther consists of an exceptional set of musicians, regardless of how you feel about their content. Listening to Satchel’s acoustic guitar playing clearly shows how talented he really is. There are no obvious overdubs or instrument tracking that I could detect from listening to the album. Michael Starr sounds, as always, like an early David Lee Roth. On several songs, the so called “Talented Ladies” of the string quartet add to the acoustic vibe quite nicely.

“Death To All But Metal” has been jazzed up into a bit of a bluesy swing. “The Burden Of Being Wonderful” and “Weenie Ride” incorporate the string quartet, who also plays along with a few other tunes. “Gloryhole” is a solid interpretation of the original, as are “Fat Girl (Thar She Blows)” and my favourite sing along song “Community Property.” There’s some talking from Starr and Satchel, but no lengthy stories like they do on tour. My copy of the album clocks in at 45 minutes with 10 tracks including some inevitable banter between the band members.

Some have suggested they would have preferred a new album with new songs from Steel Panther rather than an acoustic rehash of old hits. I might tend to agree, except Live From Lexxi’s Mom’s Garage shows off the talent this band has, and the intricacies of each track. That said, I’m looking forward to a new studio release sooner rather than later. While this might be a good appetizer; it’s no main course, to be sure.