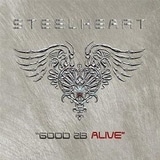 Review:
Steelheart has returned with their first new full-length album in over a decade. Of course the only original member left is singer Miljenko (Michael) Matijevic, so the blame for this abysmal effort falls solely at his feet. If you were expecting a return to their glory days, the days of memorable 80s hooks and glass-shattering high notes, you are going to be very disappointed. Nothing, and I do mean absolutely nothing, on Good 2B Alive reminds the listener of Steelheart‘s original sound.

It is extremely frustrating when a band resurfaces yet sounds nothing like they used to. If musicians insist on changing the sound, why don’t they just use a new band name? Who knows, but this will go down as a Steelheart CD in name only. The first thing people will want to know is if Matijevic still has the voice that is capable of hitting those unbelievably high notes. The answer is yes, but all too often those screams are covered in studio trickery or drowned out by de-tuned music that lacks any melody at all.

It’s pretty bad when the best song is an acoustic number that ends the album. “G2BA” is one of the few tracks in which you can actually concentrate on Matijevic‘s voice, which obviously still sounds great. However on some of the other songs his voice is distorted, and the only time it works is on the song “LOL”, which succeeds because of its heaviness and nothing else. But why would someone who has such a great voice (even if you don’t like it you can’t deny he has talent) want to mask it with so many studio tricks? It would be similar to a nude dancer known for her voluptuous breasts refusing to take her shirt off.

Rather than hark on what is bad about this CD, which would take too much typing anyway, here are the few things I liked. As I said earlier the lead-off single “LOL” is good enough and the guitar solo on “Samurai” is alright but there are far too few memorable guitar moments on this album. I liked the chorus on “Shine A Light For Me”, which was an otherwise boring song and I didn’t mind “You Showed Me How 2 LV”, but maybe I was just feeling sorry for the band by the time I got to that song.

It may be Good 2B Alive, but it ‘sucks 2B listening to this CD’. Steelheart got a bad enough rap when they were releasing good music, I can’t even imagine how much shit they will get into for releasing this disappointment. This CD is entirely too modern for its own good and should have been released as a solo album or scrapped completely.