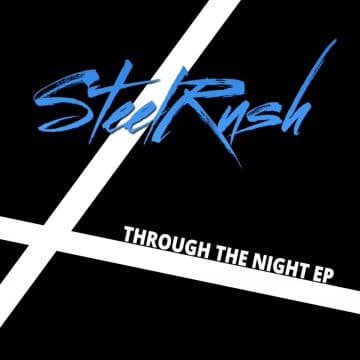 STEELRUSH
THROUGH THE NIGHT EP
Released on September 24, 2016 (Independent)

Review:
Well, well, well, if 2017 isn’t starting out like gangbusters. I know, as most of everyone else does too, that I like to toot my own horn when I share the goods with the masses. Sure it’s well deserved tooting as I love to share the eclectic coolness of the bands about the world that I have deemed most excellent and trust me, you all will freak when hear about this band, but alas I need to give props to my Finnish brother Stefan for cluing me onto this totally kick ass MHR/AOR band from Bhopal India — SteelRush.

Firstly however, pick your jaws up off the floor, especially if you went ahead and listened to the tracks already. I get it, staggering that some of the best MHR/AOR you will hear all year is hidden away in India and equally amazing is to how proficiently this duo is at crafting period perfect ’80s coated, keyboard driven, harmony laden, hook filled, tastefully solo’d tunes ever self produced and distributed. This of course is a short term situation as I can’t fathom the likes of the usual suspects in AOR not clamoring to not only re-issue this EP to get the boys on the roster for a full length.

The title track “Through The Night” kicks off the EP with a tastefully crafted key driven verse that builds to a guitar driven chorus that will make fans of Journey, Europe and House of Lords grateful. Next is “Round N Round” where Apoorv incants a Genesis/Phil Collins flair to his vocal and the song’s chorus soars with gobs of keys but massive guitars as well. “Take Me Away” is a pure arena rocker a la Bryan Adams or Runaway era Bon Jovi again with a massive key and guitar duel covering an infectious chorus and verse that hints at some ’80s synth pop acts. The solo on “Take Me Away” is quite memorable as well filled with runs and riffs and if you dig Toto or even Christopher Cross, this tune will please you. “Mysterious Eyes” doesn’t deviate from this classic SteelRush formula of big guitar, big keys and massive harmonies. This final track is a bit of a cigarette lighter arena ballad when compared to previous mid to uptempo numbers. However, the track is an instant favorite akin to the artists mentioned with some Hysteria era Def Leppard thrown in and again the outro solo is perfection and will perk up Neil Schon fans’ ears no doubt.

We have learned in these four songs that Aham is quite the guitarist as well as songwriter and along with Apoorv‘s lyrics and vocal stylings, the duo is a modern day Idol and Stevenson with all the ’80s sensibilities. Production is upper tiered demo quality and has a vintage flair to the production courtesy of good amounts of reverb and the song stylings lends themselves to this. Sure if Butch Walker or Mutt Lange were to throw two full bags of money at this EP and give it a proper and massively over layered production, it could improve. However, as the Through The Night EP stands, it is pure MHR/AOR demo perfection and any fan of ’80s AOR will eat SteelRush up.

SteelRush‘s “Through The Night” video:

SteelRush‘s “Round N Round” video:

SteelRush is a Melodic Rock/AOR band formed by Aham Saxena. Digital Download – https://steelrush.bandcamp.com/releasesLyrics: Your eyes stuck to the keyhole …

SteelRush is a Melodic Rock/AOR band formed by Aham Saxena. Digital Download – https://steelrush.bandcamp.com/releases Lyrics:’tween the mist that stole my h…