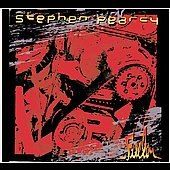 Review:
Why Stephen, WHY? What possesses 80s rock icons like Ratt‘s Stephen Pearcy to completely ignore their pasts and cater to an audience that will never embrace a former hair metal rocker? Albums like Fueler are completely out of character. Can you imagine the outrage Catholics would experience if the Pope decided to ‘broaden’ his horizons and dabble in Satanism? That is the same type of outrage Ratt fans will feel when listening to this junk.

I’ve always enjoyed Stephen‘s vocals on records, he is both unique and sleazy at the same time – but on Fueler he is rarely either of these. Finding a killer track on this is like trying to find a virgin at a Vegas Cathouse – they are few and far between. For fucks sake, there is even a tune called “Godsmack”! Even the single “Drive With Me” is lackluster, and is Stephen trying to imitate Prodigy on “Spy Vs. Spy”? Oh the horror!

Was I able to find anything worthwhile here? Well, “Gambler’s & Thieves” has its moments. “Novocain” isn’t bad in an Alice Cooper Brutal Planet kind of way and “Red Licorice” actually has some harmony to it and would have fit on Arcade‘s A/2 release. Oddly enough, the last two songs I just mentioned only appear on Perris Record’s 2006 European version of Fueler, so Americans miss out on the best material.

Fueler may have more going for it then Wildside‘s self-titled or Gene Simmons‘ Asshole, but that isn’t saying much is it? OK Stephen, if you wanted to experiment I can let this release slide, but only if you concede that it is a flawed concept and return to what made you famous. As for me, I will try and erase this CD from my memory by playing Ratt and Arcade albums continuously.