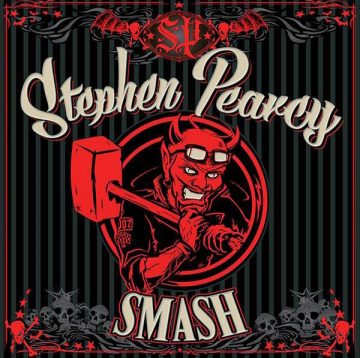 Review:
What I really enjoy about sleaze rock is that some of the people who were involved in creating the genre back in early 1980s are still around playing live and recording new music. The story of this genre truly has its legends — genuine rock and roll survivors. One such man is Mr. Stephen Pearcy.  This particular gentleman who is a vocalist, and one of the driving forces behind the multi-platinum selling sensation Ratt, really carved his name in the annals of rock music.

You may like him or not but this man has seen it all in rock n’ roll — the ups, the downs, the filled in arenas, and sold out tours, as well as playing to a handful of people in run down hellholes. One thing which sets Pearcy apart from really every other singer in this genre is his really unique vocal delivery. As pointed above, you can like it or not, and I know a lot of people think his singing was Ratt‘s low point, but I believe that along with the guitar delivery from Warren DeMartini and Robbin Crosby, Pearcy‘s vocals created this legendary LA band’s unique style and distinguished it from the rest.

The last record I heard Pearcy sing on was Ratt‘s powerful comeback album Infestation, which was released back in 2010. Since then, the band pulled what was as close to a full possible reunion, getting original bassist Juan Croucier back in the fold (original guitarist Robbin Crosby passed away in 2002), only to implode and break up a few years back, mostly due to internal conflicts between the band’s loudmouth drummer Bobby Blotzer and, really everybody else involved. Blotzer pulled what was understood by many of the fans (including me) as a hijacking of the band’s name and toured with a set of hired guns under the Ratt moniker, only to apparently lose a key motion in court by the end of 2016. This carved the way for a new album by Pearcy, DeMartini, Croucier together with Carlos Cavazo on guitar and whomever they will choose to sit behind the drum kit. But before that, Pearcy decided to release an album of his own solo material, which was written mostly during the time when the real Ratt was on hiatus and he was performing as a solo artist.

A fruition of those sessions is in my opinion one of the first most anticipated releases of 2017 in sleaze rock genre — Smash. The record was done with Pearcy’s backing band with some of whom, for instance guitarist Eric Ferentinos, Pearcy has a long collaboration relationship, spanning even over a decade.

The album compromises of 13 original tunes. The impression I got after listening through this record is that it is really a walk through Pearcy’s memory lane. It has some tracks which bare a crazy resemblance to Ratt‘s original sound, like “Ten Miles Wide” and “Jamie” where guitars are really making a throwback to the Crosby and DeMartini style of dual play. There are songs which remind me much more of Pearcy’s solo efforts like “Hit Me With A Bullet,” “Lollipop” and the excellently energetic “Dead Roses.” There is a track called “Shut Down Baby” which could be probably on the ill-fated 1996 RATT‘s Collage album as it reminds me of “Steel River” which was also a rerecording of Pearcy’s original tune “Railbreak.” There is even one track — “Want Too Much” which could fit on Pearcy’s former band Arcade’s sophomore effort, and often forgotten A/2 release. Finally, there is also a complementary power ballad “Summer’s End.” So in my opinion, the only area Pearcy didn’t explore here are his industrial like attempts from his Vertex days in the late ’90s.

All in all, this record is very versatile, and the songs are quite strongly written. The standout tracks to me are the aforementioned Ratt sounding tracks, as well as “Dead Roses” and the equally energetic “Passion Infinity.” There is not really much of a low down here. To me, maybe the semi-acoustic, country-like “What Do You Think” is weaker than the other tracks but it is not a tragedy by any means.

Therefore, overall, this album in my opinion is a very versatile, yet still a very rock oriented record. Diehard Ratt fans should be satisfied and as well should general hard rock aficionados. I find this record a welcome preparation before the new upcoming Ratt record, which bearing in mind the last collaboration between DeMartini and Pearcy, might just be a contender for Sleaze Roxx’s Top 10 Albums of 2017 if released this year.

Stephen Pearcy‘s “Want Too Much” song: