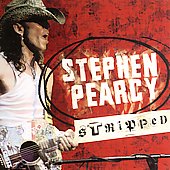 Review:
Ever since Tesla hit it big with their 1990 album Five Man Acoustical Jam, rock bands that are usually plugged in have tried to pull the chord and reach that same level of success. The latest rocker to give it a shot is Ratt‘s Stephen Pearcy, who was a member of the Metal Mania Stripped tour and has now released an album recorded live at the infamous Key Club.

Acoustic/unplugged/stripped CDs are only as good as the voice leading the band, and we all know that Stephen Pearcy can be hit and miss away from the studio. So it didn’t surprise me at all that some of these songs work well and others not so much.

The best of the bunch are “Back For More”, “Slip Of The Lip” and “Way Cool Jr.”, Stephen‘s voice holds up on them – while he sounds strained on classics like “Lovin’ You’s A Dirty Job” and “Lay It Down”. The old Arcade ballad “Mother Blues” sounds the same as the original, but I never did like that song. There are also a couple of cover tunes thrown in with “Oh Well” being the best.

You can pretty much guess what Stripped sounds like before even buying it, and if Stephen Pearcy tackling his old hits acoustically interests you I suggest picking it up. Stephen himself says he prefers to be plugged in and I have to agree. The liner notes with a brief history of each song is a nice touch.