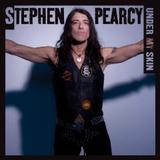 Review:
Stephen Pearcy, the flamboyant singer of multi-platinum rockers Ratt, has recorded another solo record. Is it different from his Ratt albums? Yes. In what ways? You’ll find out…

Actually I knew what to expect from this CD after listening to the first song on it, “You’re A Lot Like Me”, and that is not the catchy ‘Ratt n Roll’ that we all know and love. If you like Alice Cooper‘s Dirty Diamonds and Ratt‘s Collage you’ll like Under My Skin, if not, stay away, you’ll be disappointed, I know I was. Not to say that there aren’t a few gems here, but they are outweighed by the filler in my opinion. The songs are written in old Ratt and AC/DC fashion, and the CD as a whole sounds a lot like Arcade‘s A/2.

I’ll admit that I was never a fan of this kind of music, which I would describe as garage rock. A few songs really stand out like “You’re A Lot Like Me”, “Big Nothin'” and “Here We Go Again”, while other songs are just forgettable. Even the songs that I mentioned as stand outs are not really written well, they are just above the album’s average. To be honest I was most excited to hear the new version of the Ratt hit “Round And Round”, this time done with female rockers The Donnas. However it is easily forgettable too, I would rather listen to the original any day.

Should you get this album? If you are into garage rock and the aforementioned albums, yeah, get it, and you’ll enjoy it. It is after all a huge step up from Fueler, but pales in comparison to classic Ratt. If you are not into the garage rock genre, or even a big Stephen Pearcy/Ratt fan, don’t get it, you’ll waste your money.