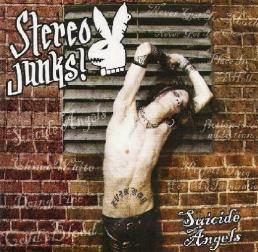 Review:
Good lord!!! Up and coming guitarists aren’t starting to name themselves after Poison‘s out of control axe-slinger are they? But don’t worry, these Finnish upstarts look more like Buckcherry then Poison and sound closer to Iggy Pop fronting a supercharged punk version of Circus Of Power then any fluffy haired posers.

This is a cool mini album, when you throw it in the computer it loads with links to the songs, photos, lyrics and the “China White” video – for a new band it is very professionally done. Oh yeah, I also like their upset bunny mascot – it sure beats the hell out of that thing Riot used to have gracing their covers. The guys claim to be an updated version of bands like The Stooges, Hanoi Rocks, Guns N’Roses, etc, and a punk version of the later isn’t so far fetched. In fact the best song on this disc, “China White”, even starts off with the same guitar pattern as Guns N’Roses‘ massive hit “Paradise City”. But the song stands up on its own as well, it has a steady beat and the out of control Iggy Pop vocals work great.

The new wave of sleaze bands, of which the Stereo Junks are included, add elements of 80s hard rock, mix it with some punk and then speed everything up. Now I’m not a fan of punk, but artists like the Stereo Junks seem to add just enough without going overboard – and I can live with that. You can hear these guys and buy Suicide Angels at either www.stereojunks.com or www.myspace.com/stereojunks.