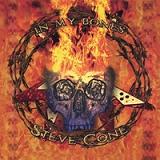 Review:
One man band (or as close as you can get) Steve Cone has been releasing albums for close to a decade now, yet this is the first time I’ve ever heard of the Arizona (via New York) native. This isn’t too surprising since I don’t listen to much music like this – anymore. The term heavy metal has been twisted over the years so that what I listen to these days is usually referred to as hard rock, yet Steve Cone could easily be considered a metal artist with few disagreements.

While not everything here interests me, I will say one thing – this guy can shred! Falling somewhere between the metal of Judas Priest and the working-man’s delivery of Riot, In My Bones offers up some interesting music. The one issue I have with this CD is that there are a few too many songs that don’t match the best tracks on the disc.

“In My Bones”, “Get Down”, “Like The Dog I Am” and “Crazy Like Me” are four exceptional tracks that display the magic Steve can create on the fretboard. You can’t help but love the ‘crunch’ delivered on the title track and the vocals themselves are unique, sounding as if they are multi-tracked. However those four tracks are offset by songs such as “Nothing That I Can Do” and “Inside Your Head”, which don’t work as well. The rest of the album falls somewhere between those two extremes, not disappointing but not earth-shattering either.

There is nothing wrong with In My Bones, and it is apparent that Steve Cone has an abundance of talent, I’m just not so sure that I am the one to accurately judge that talent. There was a time I would have been all over a CD like this, but over the years my tastes have changed. I’ll leave it up to the listeners to judge the latest release from this metal musician, but I have no doubts that music is in fact ‘in his bones’.