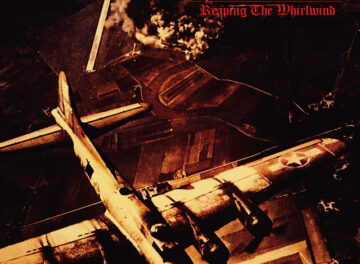 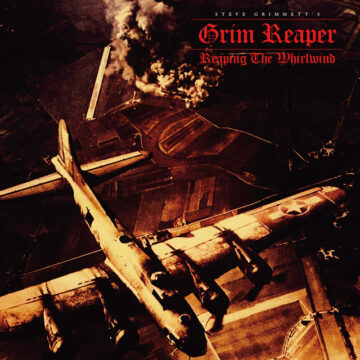 STEVE GRIMMETT’S GRIM REAPER
REAPING THE WHIRLWIND
Released on March 11, 2022 (Back On Black)

Review:
I had intended on purchasing the new live album Reaping The Whirlwind from Steve Grimmett’s Grim Reaper when it first came out but never got around to doing so. However, singer Steve Grimmett‘s passing last month prompted me to purchase the live record along with his group’s latest studio album At The Gates (2019). I also wanted to purchase the group’s album Walking In The Shadows (2016) but alas, it was apparently sold out on Plastic Head‘s website. For those not in the know, Steve Grimmett was the frontman of the UK metal band Grim Reaper who released three solid studio albums in the 1980’s consisting of See You In Hell (1983), Fear No Evil (1985) and Rock You To Hell (1987). I would say the group was best known for the title tracks from each of those albums.

Fast forward a couple of decades and Grimmett wanted to resurrect Grim Reaper again but for presumably legal reasons, he ended up going as Steve Grimmett’s Grim Reaper. The title track for that band’s “debut” album Walking in The Shadows is another classic in my opinion but unfortunately, in this day and age, didn’t get the recognition that it should have received. Grimmett was then the victim of what can only be viewed as a horrific and catastrophic infection while touring in South America in January 2017 that led to the amputation of his right leg below his knee. Incredibly, by the summer of 2017, Grimmett was back on stage performing live. I had the privilege of seeing Grimmett perform live with his band Steve Grimmett’s Grim Reaper at The Rockpile in Toronto, Ontario, Canada back in late August 2019 and I recall being impressed with Grimmett‘s singing as well as his backing band including his good friend / guitarist Ian Nash.

Although Reaping The Whirlwind was recorded back on October 6, 2018 (at the British Steel Festival in Fismes, France), when I first heard the live album, it felt like I was back at The Rockpile listening to Grimmett singing. I initially also mistakenly thought that The Rockpile concert was back in August 2018 and therefore, the band’s setlist for that show was pretty much the same one as at the British Steel Festival but as it turns out, that isn’t the case. The fact that there were five different songs in the British Steel Festival set that weren’t played at The Rockpile is impressive in itself given that many “nostalgia” acts (and I use the term with the utmost respect for Grimmett given that he was obviously forging ahead with new material) from the 80’s era end up playing the same songs over and over again decades later.

Considering that the live album was only recorded at one show, it does have a real live feel to it. That’s not always the case with every “live” album that you purchase. While Grimmett‘s voice sounds really good and for the most part, he hits all the notes, I did find that he sometimes seemed to struggle a little bit but nothing substantive in any way. I didn’t really like the fact that he got the audience to sing key parts of my favorite Grim Reaper song “Fear No Evil” but then again, there are many worst offenders out there starting with Mötley Crüe frontman Vince Neil who seemingly has the audience singing 25% of any song. Grimmett‘s bandmates — guitarist Ian Nash, bassist Julian Hill and drummer Mark Pullin — are very tight and provide the perfect showcase for Grimmett to shine.

In terms of the setlist, Grim Reaper‘s debut album See You In Hell definitely gets the most love with a whopping seven (out of eight tracks from that album) with only “Run For Your Life” not being played live. If you don’t know which songs emanate from See You In Hell, I recommend that you pick up that classic album and get yourself familiar with it! The same thing goes for Rock You To Hell, which is the next best represented album on Reaping The Whirlwind with six songs (out of nine from that record). Surprisingly, the next best represented record is the newer 2016 release Walking In The Shadows with four songs and frankly all of the tracks played from that record (the title track, the opener “Wings of Hell”, “Call Me In The Morning” and the surprise closer “Reach Out”) stand up quite nicely to the classic Grim Reaper 80’s era material. In fact, sometimes, I prefer them to the songs from the earlier Grim Reaper albums. The record Fear No Evil gets very little love with only the title track played from that one.

With Grimmett recently passing away, there has been a lot of commentary on where he stands in metal history and particularly when it comes to singing. Although many have lauded him as having one of the greatest voices, his Grim Reaper discography has not always received the same love. I agree that Grimmett had a great voice. You definitely need one if you’re going to do a cover of any Ronnie James Dio song and Grimmett pulls it off nicely on his band’s cover of the underrated but classic Dio track “Don’t Talk To Strangers” that can be found on Reaping The Whirlwind. I think there’s no question that Grimmett should go down as one of the great metal vocalists of the last 40 years. Is he in the same breath as Ronnie James Dio, Bruce Dickinson or Rob Halford? Probably not in my view but he definitely was one of the best and also probably one of the most underrated at the end of the day. As far as the Grim Reaper material, any talk that the group was a “C” or “D” caliber band should stop once you hear Reaping The Whirldwind. The Grim Reaper material stands the test of time and more than anything, I think it’s just a band that didn’t get the push that it deserved to make it to the upper echelons.

The album cover for Reaping The Whirlwind features what appears to be a wooden plane. If you listened and/or watched the celebration of life for Grimmett back on September 7th (the YouTube video does not appear available anymore), you’ll have heard that one of Grimmett‘s passions along with his music was planes. It seems only fitting that one of his other big passions in life be represented on the cover of the live album although if you didn’t know about Grimmett‘s infatuations with planes, you might be puzzled on why one is portrayed on the album cover in the first place. Reaping The Whirlwind is a nice book-end to an impressive music discography from one of metal’s most underrated and passionate lead singers.