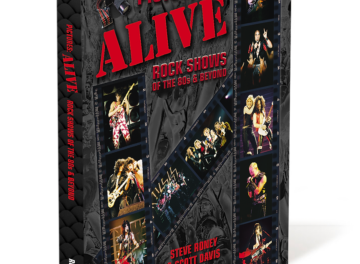 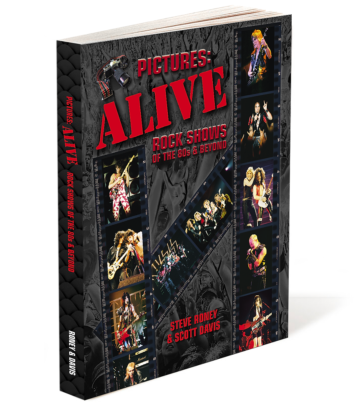 Review:
From time to time, Sleaze Roxx reviews actual books and this is one of those occasions. Pictures Alive: Rock Shows of The 80s & Beyond (“Pictures Alive“) consists of 300 pages showcasing a collection of vintage colour photos from concerts that took place mainly in the early ’80s and taken by photographer Steve Roney, along with some of his memories leading up to taking his photos. The book itself was put together and designed by Roney‘s good friend Scott Davis. What makes Pictures Alive so special for me is that I grew up on Hit Parader and Circus magazines back in the mid to late ’80s and since then, it has felt like I have already seen most, if not all, of the possible vintage ’80s photos of my favorite bands from that era. Pictures Alive changes that as Roney shares his own personal collection of never seen before concert photos with the world and in the process, I got to discover a whole slew of photos that I had never seen from hard rock / heavy metal’s golden era.

Roney caught on film some of the most memorable and iconic tours of the early ’80s including KISS promoting their albums Creatures of The Night (1982), Lick It Up (1983) and Animalize (1984); Van Halen touring behind their now Diamond selling record 1984; and, Mötley Crüe advancing their albums Shout At The Devil (1983) and Theatre of Pain (1985).  I have to say that it is so cool to see never before seen photographs from that era. It took me back to when I was a kid and I would cut out photos of my favorite bands from magazines and post them all over my bedroom walls. My favorite photos from within Pictures Alive are without question the ones from KISS‘ tours behind the albums Creatures of The Night and Lick It Up, since those include photos of the elusive Vinnie Vincent. Some of my other favorites are the photos from Mötley Crüe‘s Shout At The Devil era and Judas Priest‘s Defenders of The Faith (1984) era.

The expected suspects such as the aforementioned bands along with Def Leppard, AC/DC, Ozzy Osbourne, Dio and the Scorpions are all covered in Pictures Alive but there are some bands that I really wasn’t expecting as well such as Saxon, Accept, the Michael Schenker Group, Y&T, UFO and Rainbow. For many of the concerts, the opening band is mentioned but alas there are no photos for the majority of the support bands that are noted. It would have been amazing to see never seen before photos of Coney Hatch opening for Judas Priest in 1982, Mötley Crüe opening for KISS (in makeup) in 1983 or Twisted Sister opening up for Iron Maiden in 1985. There are only two opening bands featured in Pictures Alive — Queensrÿche opening for Dio in 1983 and Accept opening for Saxon in 1984.  There must have been some issues blowing up some of these older ’80s era photos because a few of them appear slightly blurry while the more recent ones stemming from 2000 (consisting of three KISS concerts) are definitely of better quality.

One really nice touch is at the end of the book where Roney recalls some of his various encounters with band members after concerts or at NAMM shows. Roney cites Eddie Van Halen and Ronnie James Dio as his two favourite artists seemingly based on how they treated and reacted to him. He also shares his “disappointing” encounter with one musician who will remain nameless for the purpose of his review. I also really like how Roney acknowledges the people that he shared all of these memories with from his high school buddies, Chip, Dale and Tom; to his wife Kathy (who provided him with a really cool gift); and, his book collaborator Scott Davis. A few improvements that I would have liked would have been an index with actual pages (although it’s pretty easy to find the bands that you want to check out) and having the book in hard rather than soft cover. That being said, with the latter issue, Pictures Alive is quite voluminous at 300 pages so with the soft cover and enlarged pages, it still feels like a rather sturdy book.

Overall, Pictures Alive is a fun trip down memory lane to the amazing ’80s era when hard rock / heavy metal music was considered mainstream and seemingly just as popular as the pop music that was coming out at the time.

Interview with Steve Roney on the KissFAQ Podcast Episode 421: