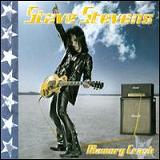 Review:
I’ve never been a big fan of instrumental albums, but I was looking forward to hearing Steve Stevens‘ latest solo offering Memory Crash. When I saw Billy Idol live a few years back Stevens more less stole the show, simply because he has a great look/stage presence and can make sounds come out of his guitar that don’t seem humanly possible.

With Memory Crash I was hoping for more of that ‘talent meets technology’ that has been Steve Stevens‘ calling card throughout his career – and I got it, occasionally. I suppose an entire album full of technological wizardry would be excessive, but without it Stevens sounds like any lightning fingered virtuoso. It is when he amazes the listener with out-of-this-world sounds that Memory Crash shines.

Although individual songs begin to blur into one, a few stand out on their own. “Hellcats Take The Highway” for instance creates a musical party not unlike that of Joe Satriani‘s hit “Summer Song”. “Memory Crash” and “Small Arms Fire” are a bit darker as they feature Stevens shredding over a steady rhythm. The only two songs with vocals are the whispery “Josephine” and a cover of Robin Trower‘s “Day Of The Eagle”. The later of which has Dug Pinnick of King’s X on the microphone, a band I’ve never been able to get into myself, but he does a good job of capturing the feeling of the original tune.

I already knew Steve Stevens was an incredible talent, and Memory Crash neither builds upon nor takes away from that fact. Unfortunately, to my ears, this CD comes across more like background music. Without vocals it seems like a key ingredient is missing, and Steve Stevens doesn’t add enough of his signature genius to compensate for that.