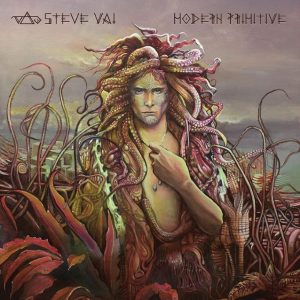 Review:
Steve Vai has grown over the years into a guitar virtuoso. Fans across the world have ranked him alongside Joe Satriani, Eddie Van Halen or Yngwie J. Mamlsteen as one of the greatest guitarists. A lot of hard rock fans I know would however narrow this list just to him and Satriani, as Eddie never made a name for himself as a solo artist, and Malmsteen is often deemed too pretentious. Funny thing is that Vai used to train under Satriani way back when they were younger. Now a lot of rock fans are divided on who is better, but in my opinion, these two players have really different styles. And while to me, Satriani seemed always as a better technician, Vai always surprised me more with his work.

And surprised I am again after listening to his latest record Modern Primitive. Right from the first track, this record seems more than just a bit odd, but in a good way. The opening track “Bop!” is a prime example. I certainly have not heard anything like that before, at least not that I recall. It is twisted like a sonic pretzel but somehow enjoyable. Vai seemingly really enjoys going strange here. Later on in the album, the experiments tend to give place to more traditional rock tracks, like the standout “Mighty Messengers” which is a very likeable song and a stellar rocker. So is “Dark Matter.” But again, one has to be aware that traditional Vai is not your usual rock experience. This guy really goes all the way around the room.

The epitome of the peculiar is “Pink and Blows Over” triptych (three song piece), if I can use such a strange word, which I believe in this review is clearly accurate, as it is not even a rock song. It is more a jazz, acid, neo-classical mix. Again, it is another “song” which I cannot seem to compare to anything I listened to this year. Some may like it, but to me after some time, this is getting too jazzy, too crazy, or maybe just too weird. Definitely a bit unbearable.

So wrapping up, it is very hard for me to give this album justice. I always thought of myself as open minded in regard to music, but in the case of this release, my openness reached its limit. I just can’t seem to get through this album in its entirety. On one hand, you have an insanely skilled musician (I think no one has doubts over that in regard to Vai) but on the other hand, you have so many styles stuffed in one album, so much craziness — out of the box jazz/neo-classical/ ambient parts — you can easily lose yourself and lose your mind in the process.

So if you have a taste for some good ol’ rock n’ roll, avoid this one at all costs as it will only bring you a headache. If you dare to provoke yourself with more than just a little bit of a smorgasbord of sounds (and noise), you might want to give this album a try. I must say that however much I was intrigued at the start, I could not listen to this album for a very long time. I guess I am not as sophisticated as I thought. As a good thing, I must add that in this release comes with a remastered version of the Passion And Warfare album to celebrate that album’s 25th year anniversary. That album was Vai’s  breakthrough record, and to many of his fans until today still stays his top release. So even if you won’t be able to dig through Modern Primitive, you may still fancy a remaster of this staple recording.