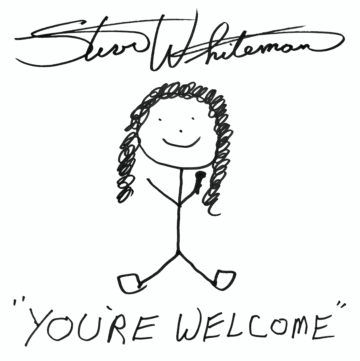 Review:
For many, Friday, July 2nd was just a day to commemorate a birth, school, work or death. For the others in the know and just a little lucky, it was a day like no other, akin to your birthday combined with any other of your favorite holidays all rolled into one ginormous giddy inducing package. So much to be excited for as not only did these lucky ones get to be at the big rock show M3, where they were treated to everyone’s favorite Cool Kids, KIX, closing the festivities. But, alongside that and equally as noteworthy was the release (and subsequent selling out) of the ageless wonder Steve Whiteman‘s first ever solo offering aptly titled You’re Welcome.

First and foremost, we aren’t going down, too far anyway the KIX story wormhole as there shouldn’t be anyone reading this review that isn’t familiar with the band and its history and truly fabulous back catalogue of work that most assuredly should be in your respective music collections, but should get regular rotation. A noteworthy exception and an obvious correlation is Steve‘s inclusion of some familiar faces lending a hand to the music that not only did Steve create and self-perform on the rough cuts and demos but that he still had both hands elbow deep in on the finished product.

From a sonic perspective, You’re Welcome is as ear wormy as can be and incredibly infectious. The production is better than many costly big label releases (thanks for that Brad) and the performances are so taunt I triple dog dare you to find a flaw. Of the 12 tracks, there is nary a skip worthy track. Steve‘s tongue is firmly planted in his, and maybe others, cheek in his songwriting and I hear many nods to the early years of KIX (and even the birth place of a number of those deep cuts in The Shooze) ala the self-titled and Cool Kids releases. It is an absolute treat for a guy like me as no rub on the brilliant Midnight Dynamite and Blow My Fuse releases, but I have an opposite of a soft spot for those first two albums. Maybe as these were my introduction to the band or maybe it’s the rough and tumble and at times “new wave” flairs along with the sexually slathered undertones (and sometimes overtones) that tickled the 16 year old me.

As I just detailed, You’re Welcome ticks those boxes with an indelible marker. Each and every song is either slathered with innuendo (“Easy”, “Prick Teaser”, “Strip” and “Tug of Luv”) or has that new wave old timey feel (“Kid Dynamite” and “Lightning Bolt”) and then many others that have a Steve staple blues harp overlay that is an absolute treat, and Steve can put on a bloody clinic with that regards. Back to the writing and production, there are many elements that resonate with the closet musician and aficionado I fancy myself as in simple elements like the hand claps in “Lightning Bolt” to the pre-chorus of “Strip” where the backing vocals slide into and out of the word “streeeeiiip.” Let’s not forget the kazoos — fabulous. A gaggle of time changes and cowbell, yup, Brice Dickinson (Christopher Walken) would be happy as a pig in slop. The Rolling Stones meets the Georgia Satellites with the KIX umbrella in “Do Me Like You Done Before” will have you toe tapping, air guitar-ing and singing along like your life depended on it. The “doot doo’s” are a very nice touch and as previously mentioned are tasty little elements that are coating this album like Pokemon. Go catch em all.

Circling back, if you are a fan of good (very good) songwriting, musicianship and popping the t-tops in your Firebird and sharing with the neighborhood your pension for what Mick Jagger opined, “It’s Only Rock N Roll, But I Like It”, then let your freak flag fly. Like the old Allied Pressings of the compilation album Freedom Rock and the TV advert used to say, “Well turn it up man!” A huge nod goes out to Steve for making this release happen. In diving into the internet and various interviews and quotes from Steve, this release certainly sounds like a labor of love. It shows and like anything he does, he is all in and has left the stage ten pounds lighter and drenched in sweat. Thank you Steve or like the aforementioned live performance, it is only appropriate that I say to you sir, “You’re Welcome.”

Steve Whiteman‘s “Shook Me In My Shoes” track: