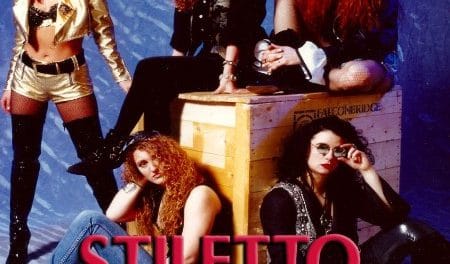 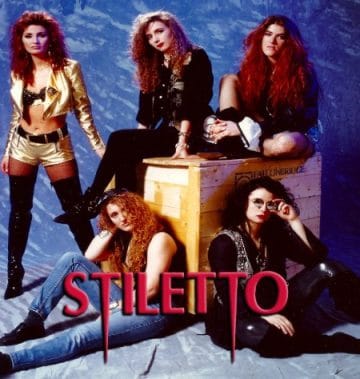 Review:
I find it of interest how despite geographical boundaries, sometimes bands can have similarities in sound and in look. Despite being geographically apart, we can sometimes see, listen and wonder to all these similarities between different bands. For example, Poison or Tigertailz, with their glam pop anthems and over the top colour, sparkle, and full-on glam imagery, or Wrathchild (UK) and Witch, and now the object of my review Stilleto, from Canada and L.A. based Vixen.

Mind you, this is not a bad thing by any means. It’s just I hear a lot of similarities in sound. So let’s get down to the nitty-gritty. Stiletto started in 1989, technically a bit after the early beginning of Vixen but right around the same time the “classic” Vixen was taking off.

The albums starts a bit light but gets rockier as the album progresses but all songs are very much radio oriented. All are very well played and I would give the slight nod to Stiletto for better songs with them being a bit catchier and also vocalist Carole Couture having a bit more of a varied voice in how she sings. Lyrics deal with everyday life but more from a female point of view (obviously). Like I mentioned, the album begins a little more light and then begins to get heavier. “Best Of Me,” “Don’t Turn Away” and “One Night” follows along these lines.

“I Can Do” starts off with a funky Bango Tango-ish bass popping, which carries over for the rest of the song as well. “Running From Love” is a full-on rocker with the Vixen influence, maybe even a bit of an even earlier Femme Fatale outfit Leather Angel/Jaded Lady influence because of its more metallic feel. The last two songs, “Through The Ages” and “Bring The Fire”, continue with the more heavy metal structure in the songs, even to the point of having some slight traditional metal elements to them.

So Stiletto‘s Don’t Call Me Sweetie is a worthy addition to those looking to the past for the musical memories and to add to their ’80s/’90s rock collection.

Reviewed by Will “Bones” Lee for Sleaze Roxx, March 2018

This album is available at: http://fnarecords.net/index.php/stiletto.htmlDon’t let the name fool you. This five-piece, all female, musical powerhouse is far …